Kierhardy Ansell is the owner of the business ‘Skate It Yourself’ and was awarded £15,000 as one of the top finalists in the 2019 Santander Universities Entrepreneurship Awards

Skate It Yourself encourages local youngsters to become more active through weekly skateboarding lessons taught by certified teachers at skating venues located across Halifax and Huddersfield.

A STUDENT entrepreneur from the University of Huddersfield’s Business School has skated to success after his business was awarded £15,000 of seed funding from one of the UK’s largest business pitching competitions.

Kierhardy Ansell is the owner of Skate It Yourself, which encourages local youngsters to become more active through weekly skateboarding lessons, taught by certified teachers at skating venues located across Halifax and Huddersfield.

After pitching his business to a panel of experts, Kierhardy, who comes from Halifax, was named as one of the top four students in the final of the Santander Universities Entrepreneurship Awards 2019.

Nathan Bostock, CEO of Santander UK, announced the winning businesses at the event held at the Regent Street Cinema in London.  Presenting the awards were Susan Allen, Santander’s Head of Retail and Business Banking and Matt Hutnell, Director of Santander Universities in the UK.

I needed to raise the money to become qualified to teach. With the help of the University’s Enterprise Team, I discovered the local council awarded grants to companies who help young people to become more active.”

Kierhardy is currently completing the final year of his degree in Business with Entrepreneurship and first launched the Skate It Yourself enterprise during his Enterprise Placement Year.

The EPY is an alternative placement for students who want to explore the possibility of starting their own business whilst having the full support of the University’s Enterprise Team, based in The Duke of York Young Entrepreneur Centre.

“I have been passionate about skateboarding for as long as I can remember,” said Kierhardy.  “What really surprises people is when they find out I also have a passion for anything business-related.  I enjoy creating new business models, writing business plans and learning as much as I can about the industry.”

The 22-year-old first came across the idea for the business when, six years prior, he was completing a community-action project as part of the national volunteer programme for 15 to 17-year-olds, known as National Citizen Service (NCS).

Kierhardy and a group of friends decided they could make a difference by developing an initiative to ‘put skateboarding back into the hands of skateboarders, through positive action’.  This phrase is one Kierhardy still uses today when describing his company’s mission statement.

Kierhardy Ansell is the owner of Skate It Yourself which encourages local youngsters to become more active through weekly skateboarding lessons taught by certified teachers at skating venues located across Halifax and Huddersfield.

In the video, Kierhardy showcases his expertise on the indoor skatepark located in the Orangebox Young People's Centre in Halifax.

To complete the training programme needed to become a fully-certified skateboarding teacher and secure a suitable indoor location, Kierhardy explained he had to think creatively in order to keep the costs down.

“I needed to raise the money to become qualified to teach,” said Kierhardy.  “With the help of the University’s Enterprise Team, I discovered the local council awarded grants to companies who help young people to become more active.  I applied and they allocated me the funds I needed,” he said.

“When I was looking for an indoor venue I was aware there was a skate park located in the Orangebox Young People’s Centre, next to The Piece Hall in Halifax.

“Calderdale Council had recently taken on the responsibility of running the centre and when I approached them about it, they revealed they were having difficulty using it because of health and safety regulations.

“They now allow me to operate my lessons from the skate park at low cost, which has meant my profit margins have increased and the Council no longer has an unused leisure facility,” he added.

At the final of the competition, which in total received 151 entries from universities across the country, Santander CEO Nathan Bostock stressed the importance of supporting entrepreneurial talent.

“We were truly impressed by the commitment, talent and inspiring ideas presented this year,” said Nathan.  “We have a long-term commitment to supporting higher education and we are proud to take an active role in fostering entrepreneurship among university students.”

To help the 12 finalists prepare for the competition, Santander Universities gave them the opportunity to take part in an accelerator week.  This provided a unique educational experience led by a series of innovative businesses and speakers. The finalists also took part in a series of workshops and masterclasses aimed at helping them understand how to get the most from their business.

Since the Entrepreneurship Awards were first launched, Santander Universities has funded more than £420,000 in support for budding student entrepreneurs and provides over £2million of funding each year to support entrepreneurship across its 86 UK university partners. 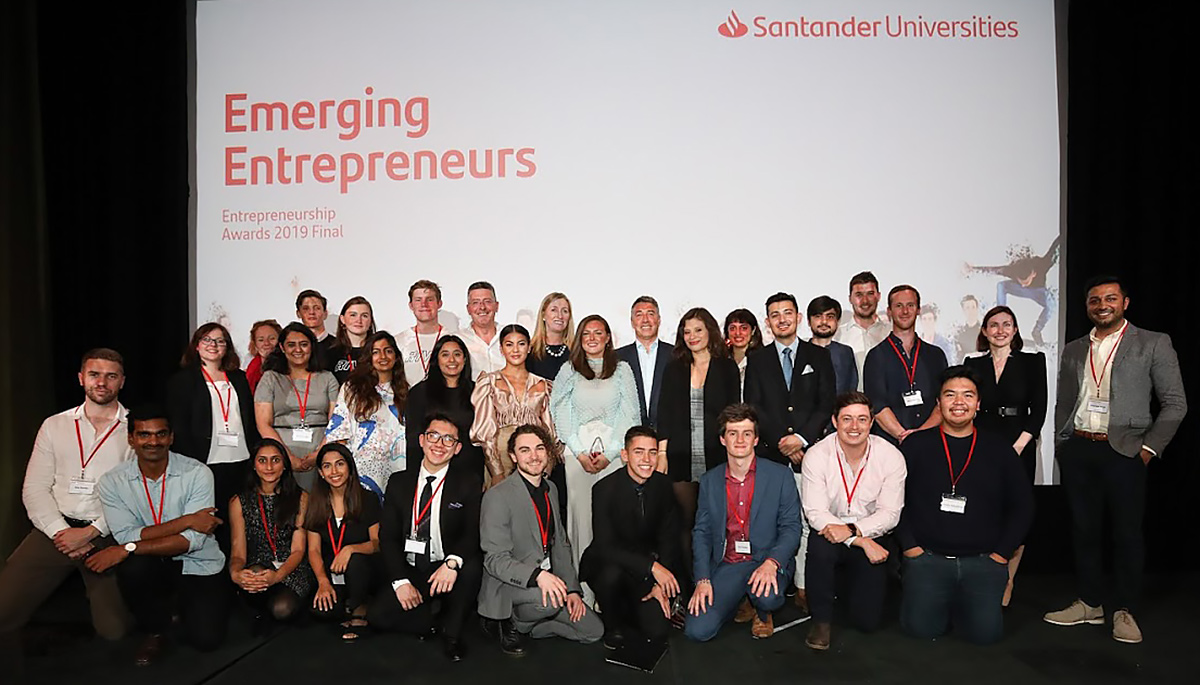