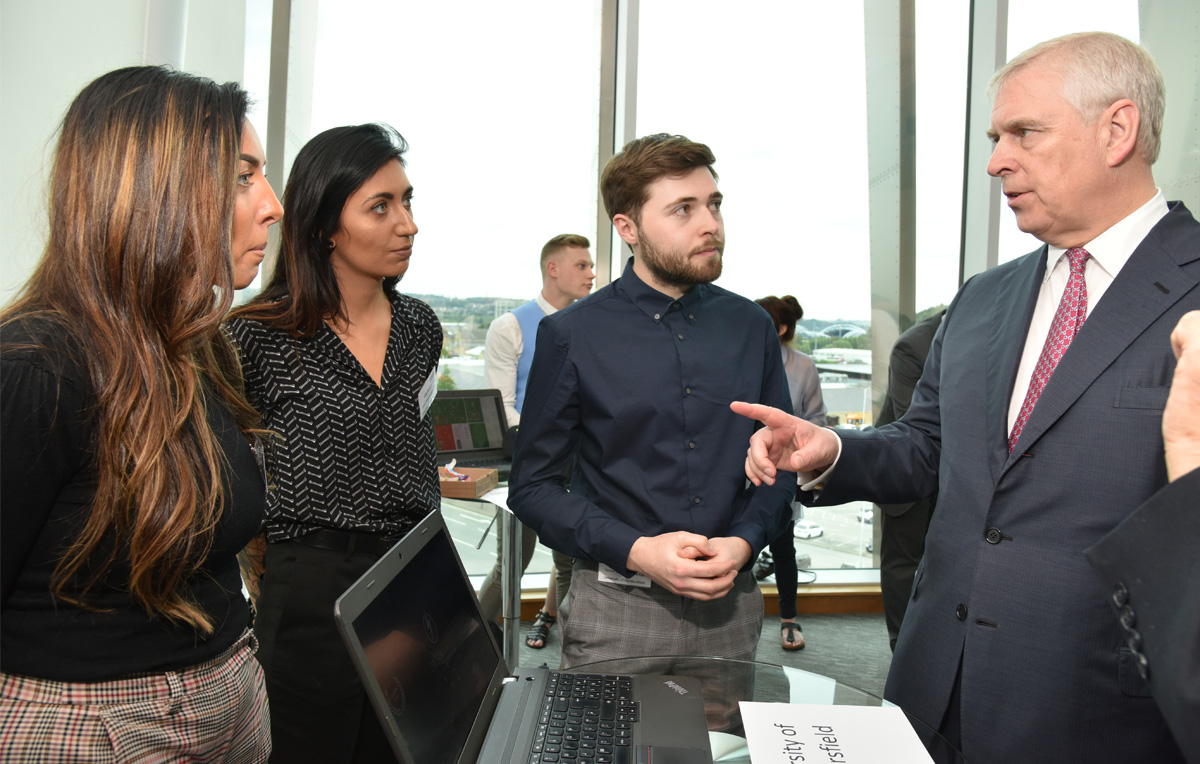 STUDENT start-up companies that could help generate the Northern Powerhouse were scrutinised by HRH The Duke of York, KG, when he returned to the University of Huddersfield for the latest edition of the annual Young Entrepreneur Awards scheme that bears his name.

It is open to universities throughout the North of England and in 2019 – the seventh year of the scheme – there were bright new businesses from 18 institutions in Yorkshire, Lancashire, Durham and Northumbria.  They ranged from an enterprise that aims to make it affordable for small firms to launch satellites, to a cutting-edge computer games company, a staff recruitment agency, a social enterprise designed to make food banks more efficient ...and a late-night sweetshop.

All of the student businesses nominated by their host universities received certificates from The Duke, who then held one-to-one talks with the young entrepreneurs.  His Royal Highness – who is Chancellor of the University of Huddersfield – is behind the Pitch@Palace initiative, which has now gone global.  He said he would explore ways it could aid some of the Young Entrepreneur Award winners to boost their businesses.

The ceremony at which His Royal Highness handed out certificates was compered by Philip Clegg, who is the University’s Head of Enterprise and Entrepreneurship.

Games design company Ocean Spark Studios was launched by three students Zacqhray Cundall, Ellie Brown and Helen Andrzejowska who, prior to setting up the company as part of their Enterprise Placement Year (EPY), didn't know one another. The studio is still going strong and was recently announced as the Huddersfield winner in this year's Duke of York Young Entrepreneur Awards.

The Young Entrepreneur Awards are hosted annually at the University of Huddersfield. This is the seventh year of the scheme and businesses from 18 institutions in Yorkshire, Lancashire, Durham and Northumbria received an award.

Hear more about their award-winning games design business in this video and also view the moment the trio receive their award from His Royal Highness The Duke of York.

Huddersfield’s own winner was the games design company Ocean Spark Studios, launched by Zachray Cundall, Ellie Brown and Helen Andrzejowska, who have just completed the final year of their games design course.

Earlier this year, Ocean Spark scooped the Student Hero prize at the Grads in Games Awards, which had entrants from 81 universities across Europe.  Judges said that the Huddersfield trio had been an “inspiration to many and a real beacon for the games industry”.

The 2019 Duke of York Young Entrepreneur Awards featured a huge diversity of enterprises.  They included StratoBooster, from engineering students at Teesside University, focused in the development of a high-altitude balloon launched rocket system, helping organisations and institutions launch small satellites and payloads into space.

From the University of Newcastle came Spareable, which has developed an app that enables community foodbanks to send out notifications when essentials items are low in stock.

A team at Durham University has launched Plastech Innovation, which aims to reduce the volume of plastic waste entering the natural environment by using a novel technique into aggregate for use in concrete and construction materials.

And a student entrepreneur at the University of Hull has launched Midnight Munchies, described as “Hull’s first late night sweetie takeaway”.