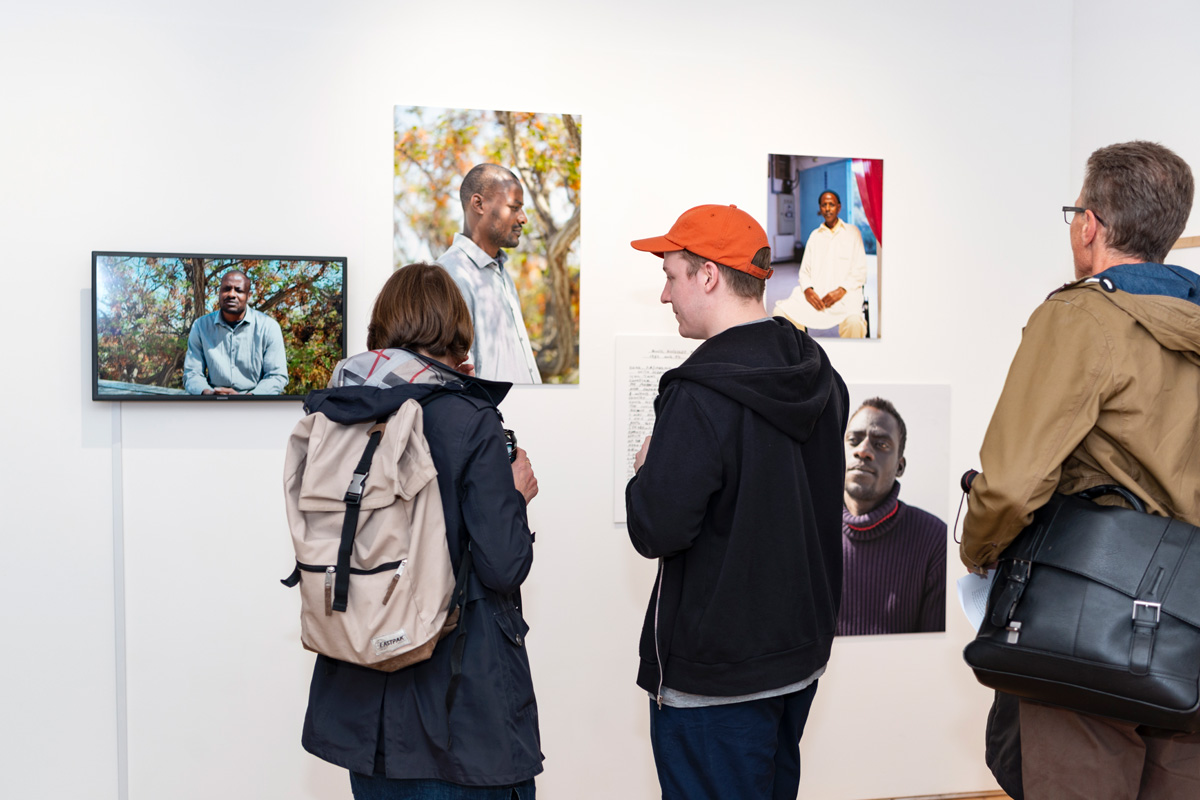 THE work of five postgraduate photographers and their tutor is featuring at an exhibition in the Huddersfield Queensgate Market – Photography and Lived Experience opened on Friday 14 June and runs to this Friday, 21 June.

Four of the exhibitors are working towards their PhD and the fifth towards his Masters by Research.  The exhibition also includes work by photography tutor, Dr Liam Devlin.

History and ‘the now’ is a running theme throughout the show, as is personal memory, as the exhibition attempts to find reason and understanding through work which includes both still images and videos.

Trauma, both personal and that of others, is also present.

Alex Beldea’s work explores the plight of 32 male refugees from a range of African countries, who have spent eight years stranded in Tunisia waiting for international relocation.  The 32 fled to Tunisia when war broke out in Libya in 2011.  They found shelter in the makeshift transit camp of Choucha, opened by the United Nations Refugee Agency, the UNHCR.  They were finally moved to another facility in the Tunisian capital, Tunis, when Choucha was dismantled in 2017.  The men are an example of the many tens of thousands that fled the conflict and with the Tunisian government continuing to refuse to initiate proper asylum procedures, the future of the refugees continues to lie with the UNHCR.  Alex’s work features the lives of men through photographs, interviews, letters and video.

Tim Brown’s images represent the early stages of an investigation into colonie vacanze (children’s summer camps) operating during the years of Mussolini’s Fascist regime in 1930s-40s Italy and the difficult inheritance that they leave today.  Though masquerading as camps for social betterment, the strict regime at the facilities was designed to turn the children into dedicated young fascists, akin to the Hitler Youth, ready to die for the sake of Mussolini and their country.  Today, they lie derelict and empty and are a haunt for urban explorers, photographers, graffiti and vandals. 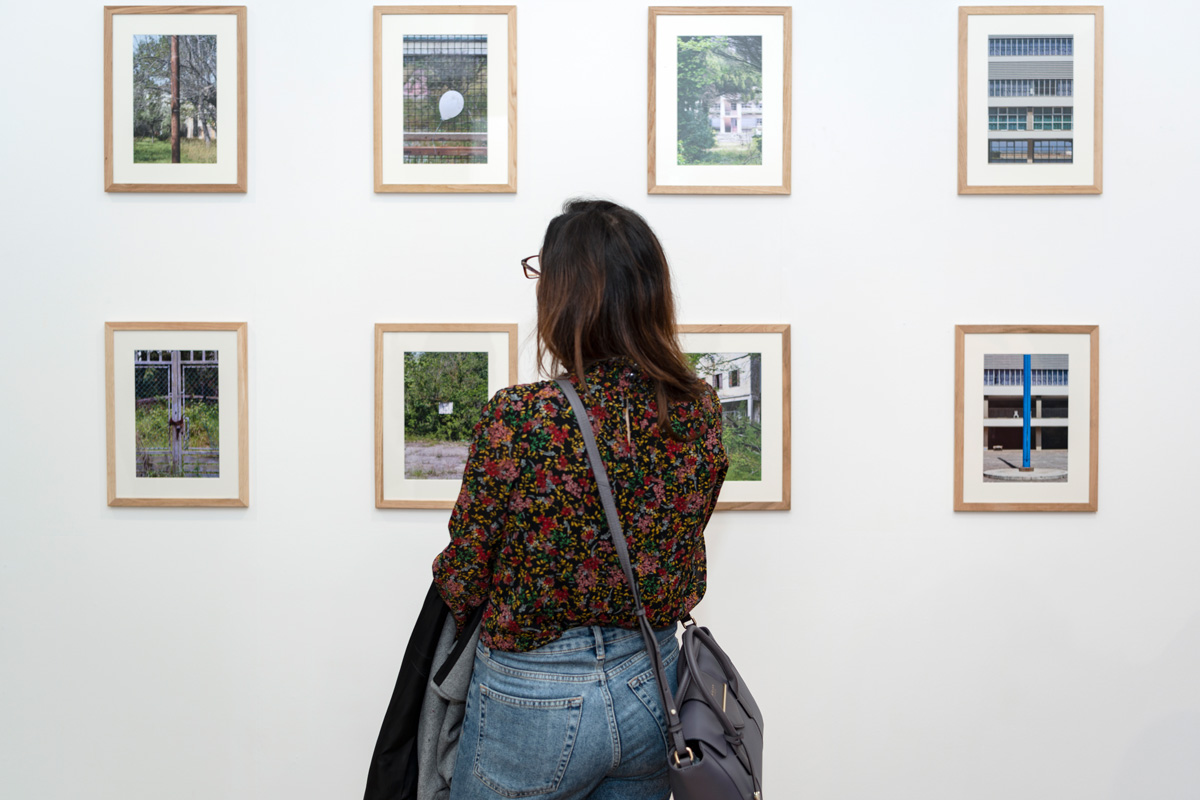 Unturned Stones, by Thomas Duffield, features a selected series of photographs from an ongoing research project that uses the medium of photography as a mode of inquiry into the complex and dynamic nature of family life.  Featuring his own family, their “shared lived experience as a family is traversed through the photographs themselves and the surrounding discourse they promote”.

Sam Welburn examines the passing of the traditional seaside holiday town.  Whilst exploring the “rhythms” of the seaside industry alongside its correlations with industrial heritage, Sam’s photographs seek to “define the Northern English Landscape, with regard to an examination of the holiday town and the relationship between topographical and embedded social formations that have attached themselves to a representation of a lost and fading culture”.

Master by Research student Simon Weldon’s work is a personal journal as he responds to his father’s own collection of photographic material “in a pursuit of answers and resolution” following his father’s death.  Though initially finding solace “in the traces of my Father”, the large collection of self-printed photographs, negatives and colour slides, far from bringing conclusion lead to a frustration in reconciling his “frequently contradictory memories and feelings towards my Father”.  The work, which follows the same physical journey of the father, tracing the meandering route of the River Aire, is what Simon describes as “a pursuit for peace from the transient nature of life”. 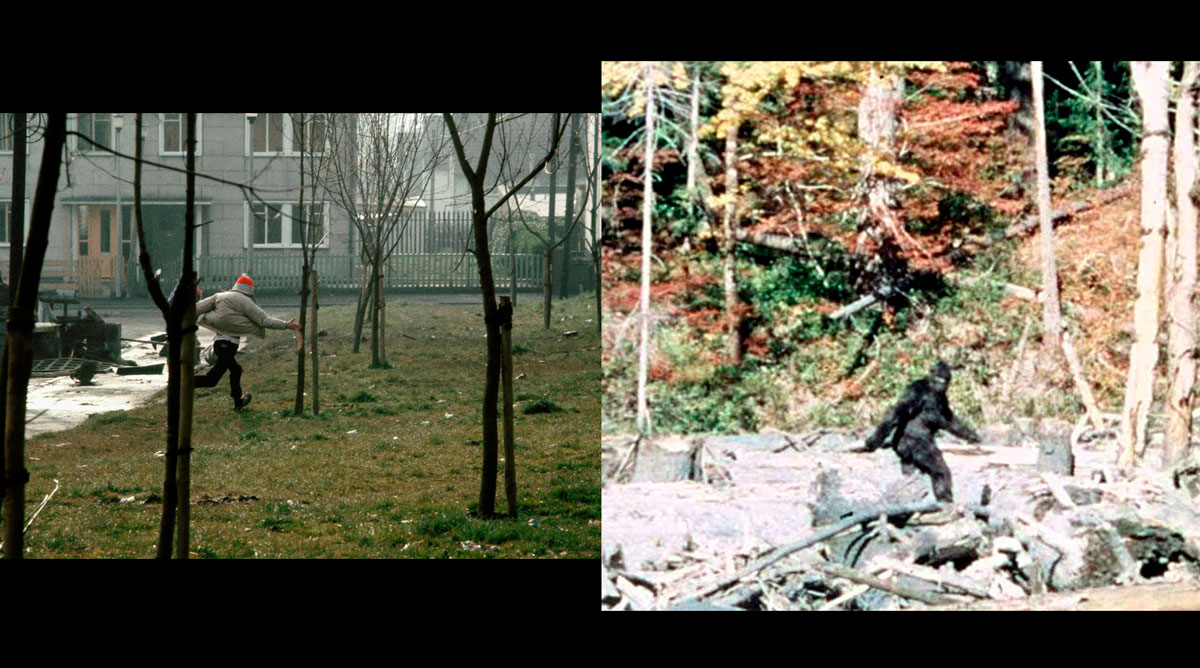 Tutor Liam Devlin’s work, entitled Bigfoot in West Belfast, revisits his childhood in Northern Ireland.  The work reflects on his experiences of growing up with the conflict in 1970s and 1980s in the Province, which was extensively represented through photojournalism, and it recollects his own childhood experiences of being “unwilling subject matter”.  In contrast, but as real to him at the time, were memories fired more by the collective imagination of himself and his childhood friends.  He recalls: “This is exemplified by a memory of a series of events that led us to believe that the mythical creature ‘Bigfoot’ stalked the small fields and woods that lay just outside the housing estate in which I was growing up.”  Liam’s short video montage and wall text intertwines the aesthetics of documentary evidence and imaginative interpretation to critically re-engage with authoritative representations of reality.

The exhibition was preceded by a symposium on the subject of Photography and Lived Experience.  The symposium welcome a number of talks on the subjects of Spatiality, The Body and Experience with a keynote address by Dr Benedict Burbridge of the University of Sussex.  Dr Burbridge has written extensively on photography, politics and contemporary art.