The theme of Lost Love spurred contemporary artist Charlotte Goldthorpe to create objects of bittersweet memories for her exhibition at Dean Clough in Halifax – running until the end of September.  The exhibition, Making Material Memories, will form part of Charlotte’s PhD. 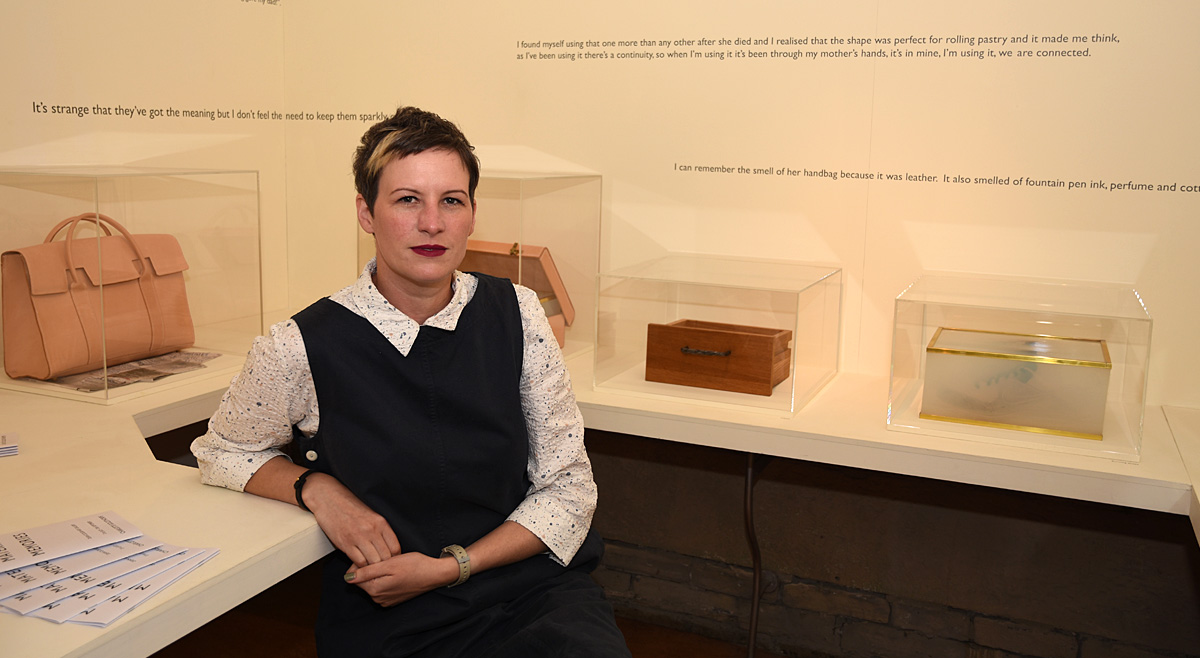 Artist and lecturer Charlotte Goldthorpe at the exhibition

UNIVERSITY of Huddersfield lecturer Charlotte Goldthorpe wanted to produce unusual artworks that store bittersweet memories of passionate love affairs and sad bereavements.  To complete the project, she learned a range of new techniques and sought stories of lost love from members of the public.

The result is a remarkable series of creations that has now been displayed at a special exhibition titled Making Material Memories.  It combines design and craft skills with storytelling.  Visitors to the show – at Dean Clough in Halifax – have included many of the people who provided Charlotte with narratives of lost loves.

“They said they found the pieces evocative and haunting.  Some felt sadness, but also pride,” said Charlotte.

Each of the artefacts in the exhibition encapsulates a personal story from the narratives that Charlotte harvested when she set up temporary Lost Love Cafes in a variety of locations.  People were invited to write their stories on slips of paper and several left contact details, enabling follow-up interviews when the story was an intriguing one.

What visitors to the exhibition see is a collection of nine stylised and intriguing interpretations of everyday objects that include a handbag, a football, a camera, trainers and a rolling pin.  They are fashioned from materials that include leather, silicon, wood and metal.

The rolling pin is an interpretation of story told by a woman whose mother owned a bakehouse in Lancashire.

“The object that she has of her mother is her rolling pin and it means more to her than her mother’s engagement ring or things of higher value,” said Charlotte.  A silicon sleeve on the outside the of the pin contains a copy of the mother’s handwritten recipe for gingerbread.

The football – which uses traditional stitching techniques in veg tan leather – encapsulates the story of a man whose father was in the Royal Navy.

“He could have become a professional footballer, but the timing was wrong.  We looked through the photograph album that accompanied the stories and I used the images to print on the sections of the 1940s-style football,” said Charlotte.

The exhibition also includes unusual objects saved after a relationship had broken up.

“A young lady kept her boyfriend’s shoes in her car for nearly a year after they had split up.  It was only when she came to sell the car she found them underneath the seat.  They were old battered trainers, but they represented her first love.

“The finished piece captures a ghostly pair of trainers in a large square block of silicon, finished with a brass frame,” said Charlotte.

The exhibition also includes a crocheted toilet dolly held in a suitcase and it holds the memory of a much loved grandparent.

“She sounded like a lovely Nana, knitting clothes for dolls, enjoying watching the wrestling and making copious pots of tea!” said Charlotte.  “She had so many stories to tell of her Nana it was hard to fit them all in!

“What I wanted to do was build relationships with different people to create objects to represent their lost loves, but also, as a maker, I wanted to broaden my craft.”

Charlotte was already adept at working with materials such as silicon and leather, but a blacksmith taught her how to forge, so that she could create metal objects for the Lost Love collection.  Another craftsperson taught her crocheting, and wood turning and soldering are among the other skills that Charlotte has added to her creative repertoire.

With a background that includes design work and prop making for major BBC productions, plus running her own accessories label, Charlotte Goldthorpe is now a Senior Lecturer at the Department of Fashion and Textiles at the University of Huddersfield.  Her Lost Love project is the basis for a PhD that she is currently completing.  The exhibition continues at the Bookshop Gallery, Dean Clough, Halifax, until the close of September (10am-5pm).

The art collective Brass Art and their exhibition, that-which-is-not, is on display at the Bury Art Museum and Sculpture Centre

A Bundle of Birds, purchased at auction, is an important addition to the world-class collection of the poet’s limited editions