Huddersfield researcher Sarah Williamson has created an innovative campaign where the Barbie doll, who often comes under fire from feminists, is helping to raise awareness of the very thing she is criticised for. The iconic doll is now Sarah’s main ally in her quest to draw attention to gender inequality and can be seen campaigning at the Manchester Central Library until the 6 September.

BARBIE is often subject to fierce criticism from feminists.  But now the doll with long blonde hair, porcelain skin, pouting lips and wasp waist has been enlisted as the invaluable ally of an innovative University of Huddersfield researcher who campaigns on gender inequality in art galleries and museums.

Sarah Williamson – a Senior Lecturer in the University’s School of Education and Professional Development – has gained a global following for her ArtActivistBarbie campaign, which she describes as “radical ventriloquism”.  She equips a Barbie with a tiny placard drawing attention to an aspect of gender imbalance, photographs the doll in situ and posts the results on social media.

For example, Barbie went to the National Gallery in London and – with Nelson’s Column in the background – pointed out that it has 2,300 paintings by male artists but just 21 by women. This was one of the @BarbieReports Tweets that earned a worldwide response for Sarah, who has also penned a blog in which she describes her deployment of Barbie as a form of “culture jamming”.

The latest development is a display at Manchester Central Library, where – until 6 September – Barbie makes her contribution to an exhibition dealing with the legacy of Peterloo.  There has been an ArtActivistBarbie International Flashmob Day, plus two free workshop events and Sarah will be researching the impact of these.

Men generally are fully-clothed and gallant and heroic, while the women are often looking demurely into a mirror, engaged in the ritual of a toilette, reading a book or maybe a bit of sewing.  Or they might have nothing on at all – painted for the male gaze.”

There might be elements of humour and irony in the Barbie campaign, but the aim is serious.

“Art galleries and museums are seen by many as trusted, authoritative and influential places and the ArtActivistBarbie project researches the potential of these places as spaces for action to educate for social justice and promote change,” says Sarah, who has also harnessed the power of the Post-it Note as a way to draw attention to gender issues.

Working with Professor Darlene Clover of the University of Victoria in Canada, Sarah is co-author of an article that describes the development of the Feminist Museum Hack.

Students and other participants visited a museum in Canada and a gallery in Huddersfield, appending Post-it Notes that mount a feminist critique of certain artworks.  Before a hack, Sarah provides her students with a list of questions to ponder.

“For example, how many works of art are by men and how many are by women?  When women are represented, how are they represented, and how are men represented?  Men generally are fully-clothed and gallant and heroic, while the women are often looking demurely into a mirror, engaged in the ritual of a toilette, reading a book or maybe a bit of sewing.  Or they might have nothing on at all – painted for the male gaze.”

After three days one tweet alone had reached something like 50,000 impressions.  I realised I was on to something and so I have continued to develop ArtActivistBarbie.”

Participants write their observations on Post-it Notes which are then – with the permission of the gallery – placed adjacent to the relevant artworks, forming a collage.  A photographic record is kept and a discussion session explores the thinking behind the comments.

“I have had students get quite angry, saying things like ‘as a non-white young woman, where am I in this gallery?’” said Sarah, who was shortlisted for the Times Education Supplement’s Most Innovative Teacher award in 2018.  She specialises in arts-based pedagogy in lifelong learning and arts-based enquiry and researches the impact of the arts in professional education.

The development of the Feminist Museum Hack is one of the outcomes of a five-year project funded by the Social Sciences and Humanities Research Council of Canada.  Professor Clover has visited the University of Huddersfield and worked with students who are training to be lecturers and teachers.

“She introduced this notion of hacking into a museum or gallery to uncover what’s not being said,” explained Sarah.

The Barbie concept was a spin-off.  Instead of giving students Post-it Notes prior to a gallery visit, Sarah provided them with dolls instead and the means of making diminutive placards.

“It’s radical ventriloquism in a way!  It worked really well.  I took some photos, put them on Twitter and after three days one tweet alone had reached something like 50,000 impressions.  I realised I was on to something and so I have continued to develop ArtActivistBarbie.

“She has her own social media account and has gained over 2,000 followers in eight months.  The pinned tweet now has reached over 108,000 impressions, with nearly 12,000 engagements,” said Sarah, who is currently writing a book chapter on the project.

“The National Gallery has stated on its website that it was increasingly concerned at the lack of women in their collections and was trying to redress that.  And they said they were responding to comments on social media,” added Sarah. 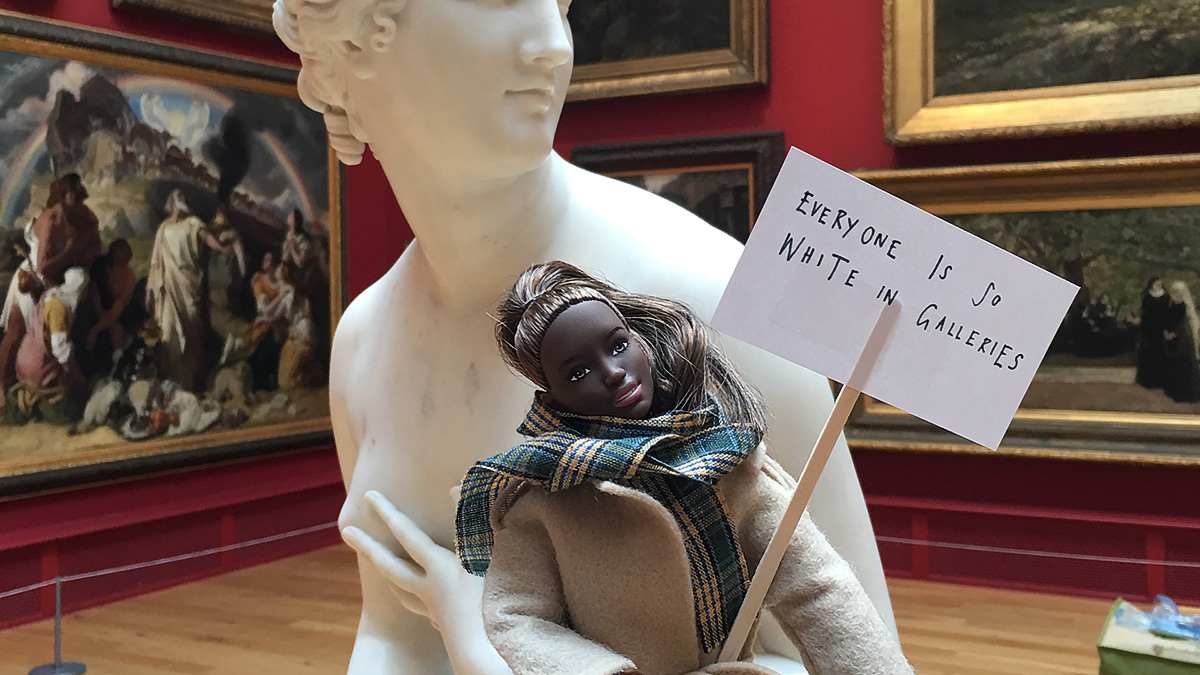 You can see ArtActivistBarbie at the Manchester Central Library campaigning against gender inequality until the 6 September.