The analyses of the study of ancient DNA from the Iberian Peninsula suggest Iberian male lineages were almost completely replaced, between 4,500 and 4,000 years ago, by newcomers originating on the Russian steppe. 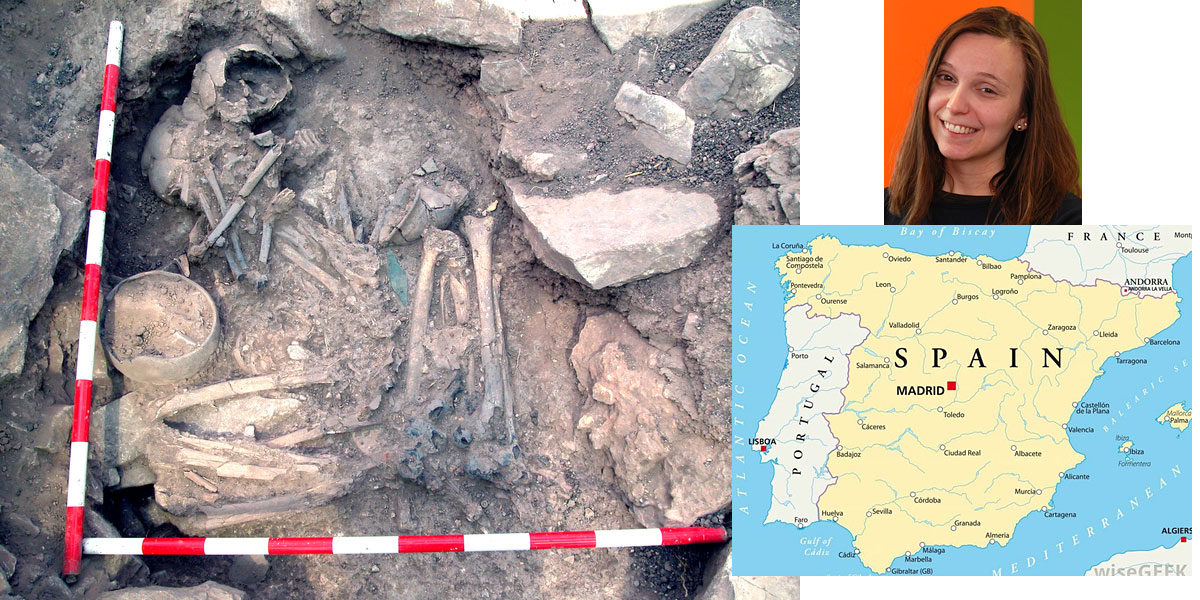 Left – a woman and man were found buried side by side at the Bronze Age site at Castillejo de Bonete. Analyses revealed that the woman’s ancestry was entirely local, while the man had very recent ancestors from central Europe. Right – Researcher Marina Silva and the Iberian Peninsula today.

THE University of Huddersfield’s Archaeogenetics Research Group has been involved in a major international collaboration documenting the settlement of Iberia over the last eight thousand years, published on 14 March in the journal Science.

The work, which involved 111 researchers from Harvard Medical School in the United States, the Max-Planck Institute for the Science of Human History in Jena, Germany, and multiple groups in Spain and Portugal, included ancient DNA results from prehistoric Portugal contributed by Huddersfield’s Leverhulme Trust doctoral scholar Marina Silva and her supervisory team in Huddersfield and the University of Minho in Braga.

The study shows in detail how Iberia’s population has changed drastically over time, from its hunter-gatherer origins before the arrival of farming 7,500 years ago, through to the medieval period and modern times.

Most striking was an influx of new people during the later Copper Age, otherwise known as the Beaker period because of the ubiquitous presence in burials of large drinking vessels, from about 4,500 years ago.  By the Early Bronze Age, 500 years later, these newcomers represented about 40% of Iberia’s genetic pool – but virtually 100% of their male lineages.  This suggests that the newcomers were mainly men, and that – somehow – they all but replaced the men living there previously, whilst the local women survived the takeover.

This is an extraordinary example of sex bias – a phenomenon described previously by Huddersfield’s Leverhulme Trust doctoral scholar Marina Silva for India.  What is even more striking now is that both Iberia and India had a similar source – a population of early metal-using stock breeders, who lived to the north of the Black Sea on Russian steppe lands, 5,000 years ago.  They fanned out in both directions, west across Europe and east into Asia, their pastoralist economy, domesticated horses and wheeled wagons giving them a crucial advantage over the indigenous farming populations.  Moreover, they are also thought to have brought the Indo-European languages spoken across Europe and India today.

Around 2,500 BC, the researchers found, Iberians began living alongside newcomers from central Europe who carried recent ancestry from those people on the Russian steppe.  Within a few hundred years, the two groups had extensively interbred.  This was beautifully exemplified at a Bronze Age site known as the Castillejo de Bonete in Spain, where a woman and man were found buried side by side.  Analyses revealed that the woman’s ancestry was entirely local, while the man had very recent ancestors from central Europe.

“This is one of the strongest pieces of evidence in ancient-DNA research of sex bias in the prehistoric period,” said Iñigo Olalde, a postdoctoral fellow in the lab of David Reich at Harvard Medical School and first author of the study.

Marina Silva added: “It’s an intriguing situation, because the Beaker culture originated in Portugal and spread across Europe from there – but at the same time, or shortly after, men who probably spoke Indo-European languages were moving in the opposite direction.  Resolving the population dynamics in western Europe during the Copper and Bronze Ages is a big step towards understanding the origins of the Celtic languages, which were spoken across western Europe before the rise of the Roman Empire.”

The development of the technology, currently being patented, will enable the production of development intricate, high-strength components