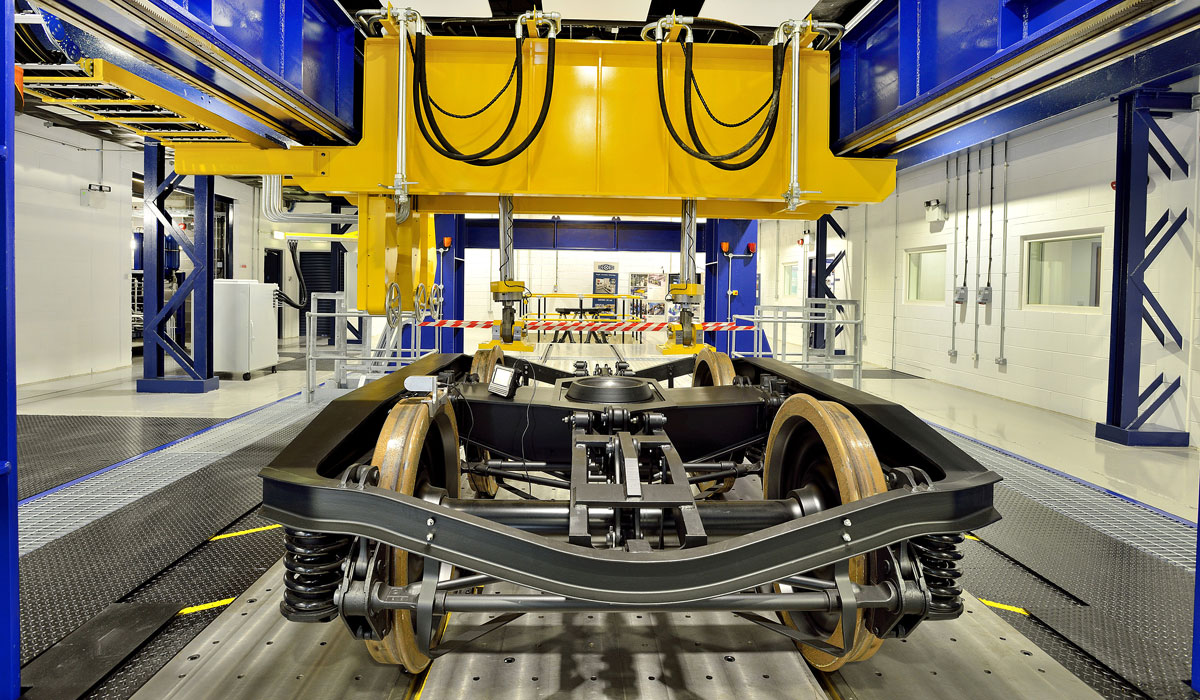 OPPORTUNITIES and concerns for the future were the focus of the presentations and discussions at the Centre of Excellence in Rolling Stock, housed in the University’s Institute of Railway Research (IRR).

The Centre is one of three rail centres of excellence under the banner of the UK Rail Research and Innovation Network (UKRRIN), funded by the Higher Education Funding Council for England with generous financial backing from the rail industry itself.

The total funding of £90 million is designed to develop collaboration between academia and industry as a step-change in innovation in the sector and accelerate new technologies and products from research into market applications globally.  The Centre of Excellence in Rolling Stock will be led by the Institute of Railway Research at the University of Huddersfield in partnership with the universities of Newcastle and Loughborough.

The work is led by the Director of the IRR, Professor Simon Iwnicki, who opened the launch event and welcomed keynote speakers Jo Hensher, HS2 rolling stock bid director for Siemens, and George Bearfield, who recently joined Rock Rail as its Director of Health and Safety.  Mr Bearfield is a graduate of the University of Huddersfield and is now a visiting professor working with the Institute.

Professor Iwnicki introduced the work of the new Centre to the audience of industry specialists and fellow academic researchers before inviting tours of the Institute’s facilities, including the £4.5 million test rig laboratory.  The advanced equipment in the lab supports both the wider railway research activities of the Institute and its new Centre for Innovation in Rail.

The two keynote speakers from industry were both well-known to the audience and they offered their views on the future of rolling stock in terms of the innovations coming on-stream and the possible hurdles that will need to be overcome.

Jo Hensher is the HS2 Bid Director for rolling stock at Siemens and she spoke about the possible innovations that a project like HS2 could bring both in terms of state-of-the-art vehicles and customer experience.

Siemens launched its newest high-speed train, the Velaro Novo, which it premiered at the international trade showcase, InnoTrans, last year.  Siemen’s innovation pipeline is very much underpinned by “what someone else wants to buy”, explained Jo, and the company has high hopes for the success of its new train as HS2 starts to unfold.  She added that the company is also looking at the potential new market for bi-mode trains, which may now have to come on-stream because of a scaling down of the electrification strategy by the government.

On a brighter note, Jo emphasised that passenger satisfaction levels were a priority for the government and that HS2 has a strategic goal of setting new benchmarks in passenger experience.  These will include improving station and platform design, seat reservation, comfort and technology and the need for better security.

When HS2 is fully implemented, it will be running 18 trains an hour running in each direction, and one of the major concerns for the day’s second speaker will be safety and security.

Thirty years ago, George Bearfield told his audience, accidents, like the major crash at Clapham Junction in 1988, were not unusual.  Today, even with a far busier network, there hasn’t been an accident for 12 years.  “People don’t expect accidents to happen today and they simply won’t tolerate them if any were to happen again,” warned the University’s visiting professor.

But despite technological advances, he warned against complacency in terms of risk management and picked out four key areas which he feels will be driven by customer expectation as much as by general necessity.

Performance and reliability were high on the list and, with customer satisfaction levels currently at their lowest for ten years, his concerns are understandable.

Areas that will grow in importance in the coming years are the greenness of the operation – how environmentally-friendly are the railways – and equally that security systems and procedures will need to be far more robust for all-round safer travel.  Mr Bearfield highlighted the luck behind the foiling of the terror attack on a Paris train in 2015.

He also spoke of the need for a more ‘belt and braces’ approach to automated monitoring, which he feels need to include a collective number of safety checks incorporated into the same system and better use of data.  He spoke of a systems error in Wales in 2017, where the temporary speed restrictions disappeared from the display and worse, the system itself did not discover that the restrictions were not there.  An accident was eventually averted by the fourth driver making the chance discovery.

Though, he said, technology is much better and generally far more reliable than it ever was, we are still in the situation of having to trust that the equipment will do its job.

He concluded that the combined fail-safe approach is high on the agenda for further exploration and it is something that he intends to follow up, as a visiting professor, with his Huddersfield colleagues in the Institute of Railway Research.

The Institute of Rail Research is a partner for the new vehicle that will introduce greater passenger comfort, capacity and safety