Jason Mallinson was one of the specialist rescue team flown in to save the Wild Boars football team and their coach, who were trapped in Thailand’s Tham Luang Nang Non Caves. Jason was conferred with an Honorary Doctorate of the University.

HIS crucial role in the operation to save young footballers trapped in a flooded cave in Thailand, while the world watched and waited, has led to recognition and distinctions for Huddersfield-born diver and explorer Jason Mallinson.  Earlier in 2019, he received the Queen’s Gallantry Medal.  Now, he has been awarded an Honorary Doctorate by his hometown university.

It was conferred when he attended one of the July graduation ceremonies taking place over nine days at the University of Huddersfield.  Speaking to an audience of new graduates after receiving his award, Mr Mallinson said that tenacity and stubbornness are often necessary to achieve goals in life.

“Don’t miss out on opportunities to do something different, something outside the box.  You never know where they might take you.  Be confident in your abilities and ignore your detractors,” he said, after confessing that: “I could never imagine that I would be stood here to receive this honour for doing something that comes naturally to me and for which I have had a passion for most of my life”.

Jason Mallinson was one of the British cave divers flown in to save the Wild Boars football team and their coach, who were trapped in Thailand’s Tham Luang Nang Non Caves in 2018. Here, Jason talks about how he got into cave diving, feeling claustrophobic and his world record for the deepest cave dive in Pozo Azul.

Jason was conferred an Honorary Doctorate of the University for Services to Cave Diving Exploration and Rescue during the University's July graduation ceremonies.

When a multi-national team of crack divers was assembled to attempt a rescue of the Wild Boars football team and their coach, who were trapped in the Tham Luang Nang Non Caves in June 2018, Mr Mallinson, as a member of the British Cave Rescue Council, was one of those to be called up.

In a series of tricky and perilous underwater missions, he would bring four boys to safety, including the first and last to emerge from the caves.  Media observers noted the Yorkshire diver’s imperturbability, but he also confessed to high emotion when he carried the final boy to safety.

Before his Honorary Doctorate was conferred, an oration was delivered by Dr Kiara Lewis, who heads the Department of Allied Health Professions, Sport and Exercise at the University of Huddersfield.

She told how Jason Mallinson was born and still lives in Huddersfield, where he attended Moor End High School and Salendine Nook Sixth Form College.  He began caving in the Yorkshire Dales in 1985 and has continued to contribute to cave dive rescues ever since.

“His exploits have led him to set distance and depth records in caves all over the world, from the deep jungle caves of Mexico to the vast dive distances of the Pozo Azul cave system in northern Spain,” said Dr Lewis.

“Jason led the world record-breaking team into Pozo Azul in 2010, where a dive distance of 8.8km from the entrance was achieved, requiring immersion times of 12 hours and one week camping underground.

“From humble beginnings in the Yorkshire Dales network of caves to international expeditions, Jason has pushed the boundaries of what was thought possible in the elite world of cave diving exploration,” continued Dr Lewis. 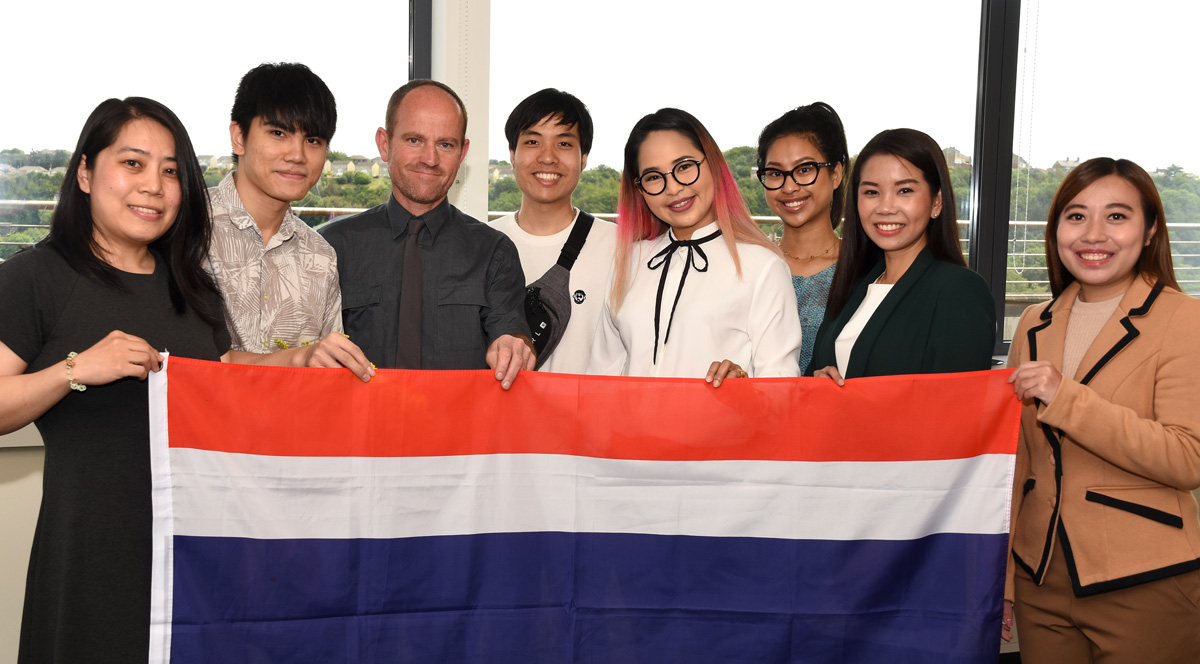 During his visit to the University, Mr Mallinson met a party of students from Thailand. They were eager to talk about the cave rescue and to thank him for his role in the international rescue operation.