The Institute of Railway Research is part of the development of the new rail vehicle that will introduce greater passenger comfort, capacity and safety to the network 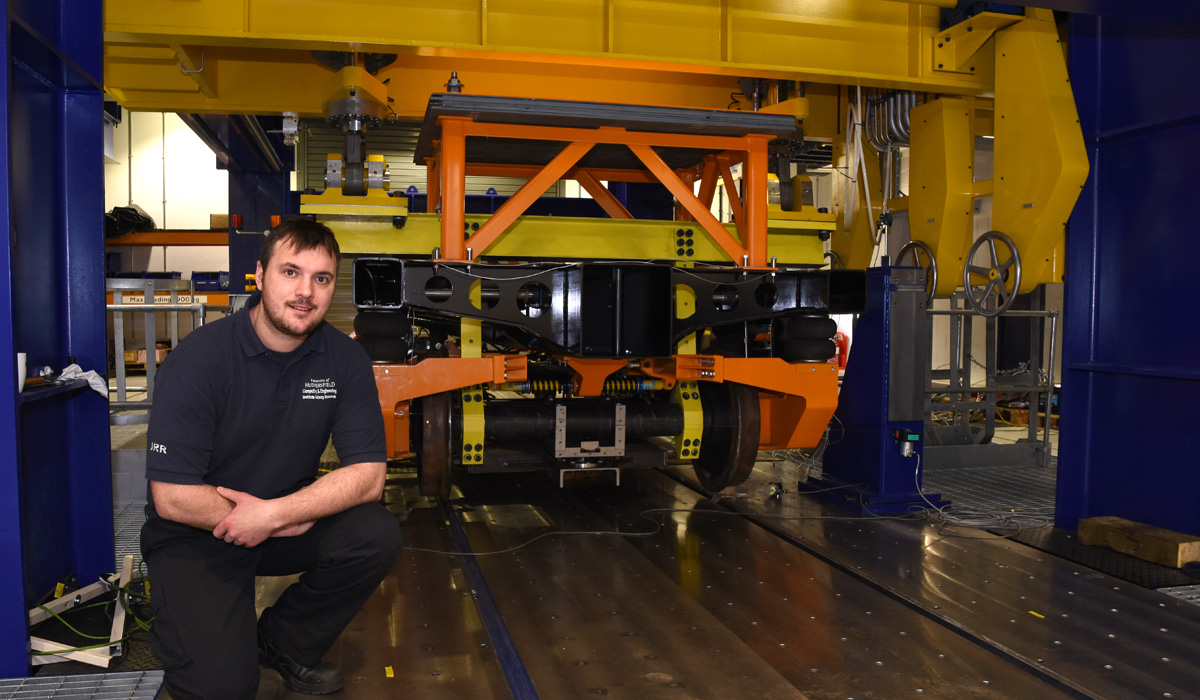 A RADICALLY redesigned railway vehicle that could help end commuter misery by offering greater comfort and seating capacity is undergoing exhaustive tests at the University of Huddersfield’s Institute of Railway Research (IRR).

The new design – named FORESEE – has two-axles in place of the bogies that are fitted to conventional vehicles.  This means major saving in weight and the potential to increase space for passengers.

The problems associated with current two-axle rail vehicles are that they offer bad ride comfort and their poor steering in curves can cause damage to track and wheels.  FORESEE solves these issues with a novel system of active suspension and steering, intelligently controlled by pneumatic and electromagnetic actuators.

“This compensates for the loss of the bogies and allows more of the available space and weight to be used for carrying passengers,” said Barnaby Bryce, who is the IRR’s Test Applications Engineer.

“And because you can carry more passengers on the same length of train, it is possible to extend capacity using the existing network, so you don’t need longer platforms,” he added.

The project is dubbed FORESEE because it addresses the “four Cs” of carbon, customer, cost and capacity.  A prototype chassis has now been delivered to the IRR and placed on its world-class £4.5m test rig.

Over the course of several weeks, Mr Bryce will supervise a wide range of tests designed to appraise factors such as the new vehicle’s ride comfort, its stability and the wheel-rail forces. The performance of the vital actuators that control steering and suspension will also be assessed.

The FORESEE concept was devised by Martin Pemberton, of Transport Design International (TDI).  The company leads the project, which has eight partners in the UK and Sweden, including the Institute of Railway Research.

One aim is to provide a comfortable, capacious rail vehicle that could be deployed across the rail network, superseding vehicles such as the unpopular Pacer trains that have remained in service much longer than originally envisaged.

The interior of FORESEE vehicles will not only offer greater capacity and comfort but will also be highly adaptable.  For example, more seats could be added to meet demand on busier routes, or they could be reconfigured.

“This is an exciting project and takes us a step closer to fully-active suspension on the railways,” said the Director of the IRR, Professor Simon Iwnicki.