The Institute of Railway Research’s David Crosbee and Professor Paul Allen won the T.A.Stewart-Dyer Prize/Frederick Harvey Trevithick Prize as “the most meritorious paper on the subject of railway engineering”. The pair developed a dual-operation wheel profile for vehicles running on both tramways and the regular mainline track adopted by Network Rail. 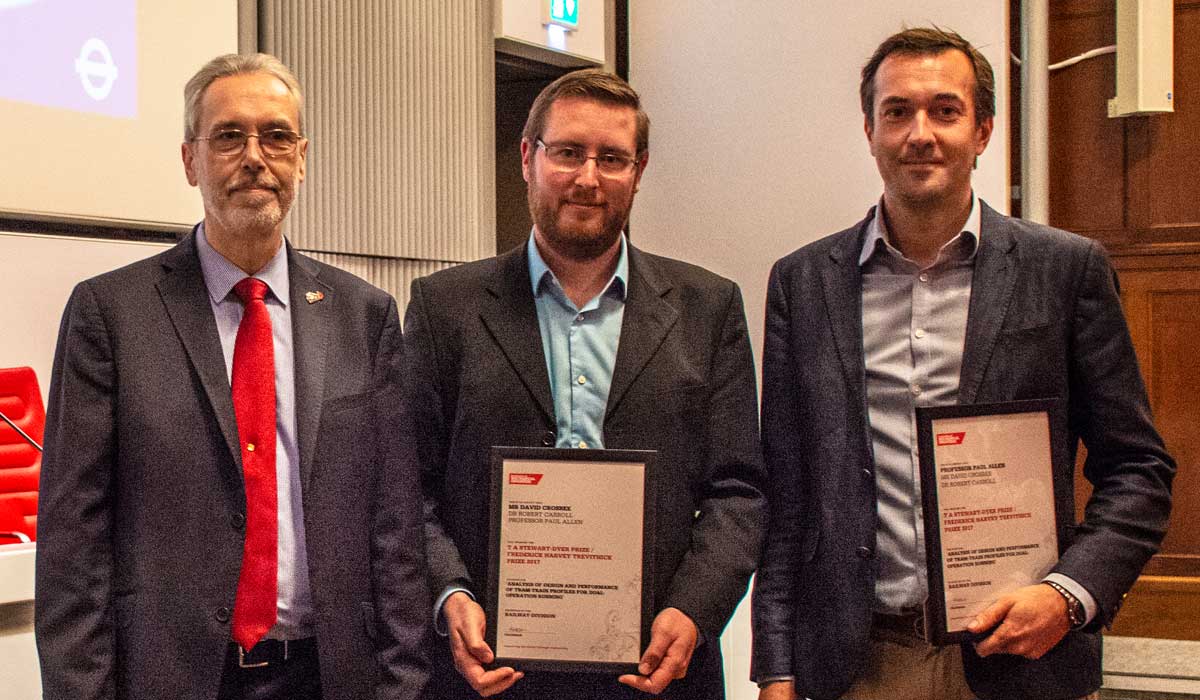 TRAINS that can travel on tramways and the rail network will add a new dimension to public transport in the UK.  A pioneering scheme is to be launched in South Yorkshire, aided by award-winning research at the University of Huddersfield that has found a solution to one of the knottiest technical problems arising from tram-trains – the need for wheels that are suitable for both modes.

At the University’s Institute for Railway Research, David Crosbee and Professor Paul Allen have been working with Network Rail and collaborating with partners including the South Yorkshire Passenger Transport Executive, Sheffield Supertram and Northern Rail on designing a dual-operation wheel.

This is necessary because the Sheffield Supertram (SST) – a light railway – has different rail profiles and track construction to those of Network Rail.  This creates a range of challenges.

For example, street sections of the SST system have grooved rails that could not be negotiated by the broader wheel profiles that are standard to vehicles that run on Network Rail tracks.  And the wheels of SST trams are not compatible with Network Rail switch blades, leading to the danger of derailment.

The problems – and the solutions – are described in detail in an article penned by the Huddersfield researchers, with Dr Robert Carroll, then of Stagecoach Supertram.  It has been selected as the winner of an award from the Institution of Mechanical Engineers.

In their article, the IRR researchers tell how after computer simulation and computer-aided design they have developed a dual-operation wheel profile that has now been commissioned and fitted to the new tram-trains that will run on the Sheffield Supertram system and then – via a specially-created junction named the Tinsley Chord – continue on Network Rail tracks to Rotherham.

Tram-trains have proved to be a successful innovation in several European cities, but the South Yorkshire project marks their UK debut.  The scheme was initiated by the Department for Transport and could be a model for other urban areas in Britain.

The researchers’ article concludes by summarising the key features of the wheel profile they have developed.

“This work has shown that it is possible to design an effective dual-operating wheel profile, even when the rail profile shapes encountered on the light and heavy rail sections of the route are very different,” they write.

“Through an iterative process of stepwise refinement and assessment, the wheel profile tread geometry has been developed to provide a level of performance in terms of contact conditions, rail wear and vehicle behaviour that was similar or better than the current SST and Network Rail profiles.  This ensures that the new tram-train profile will not have any significant impact on the asset life of the two infrastructures.”

Now, the pair will continue to work with Network Rail and Supertram for a further two years, monitoring the performance of the dual-operation wheels as tram-trains begin to run between Sheffield and Rotherham, from late autumn 2018.  Infrastructure is complete and driver-training is taking place.

As part of the development consortium, the Uni's Institute of Railway Research will test the new rail bogies on its £3.5m test rig