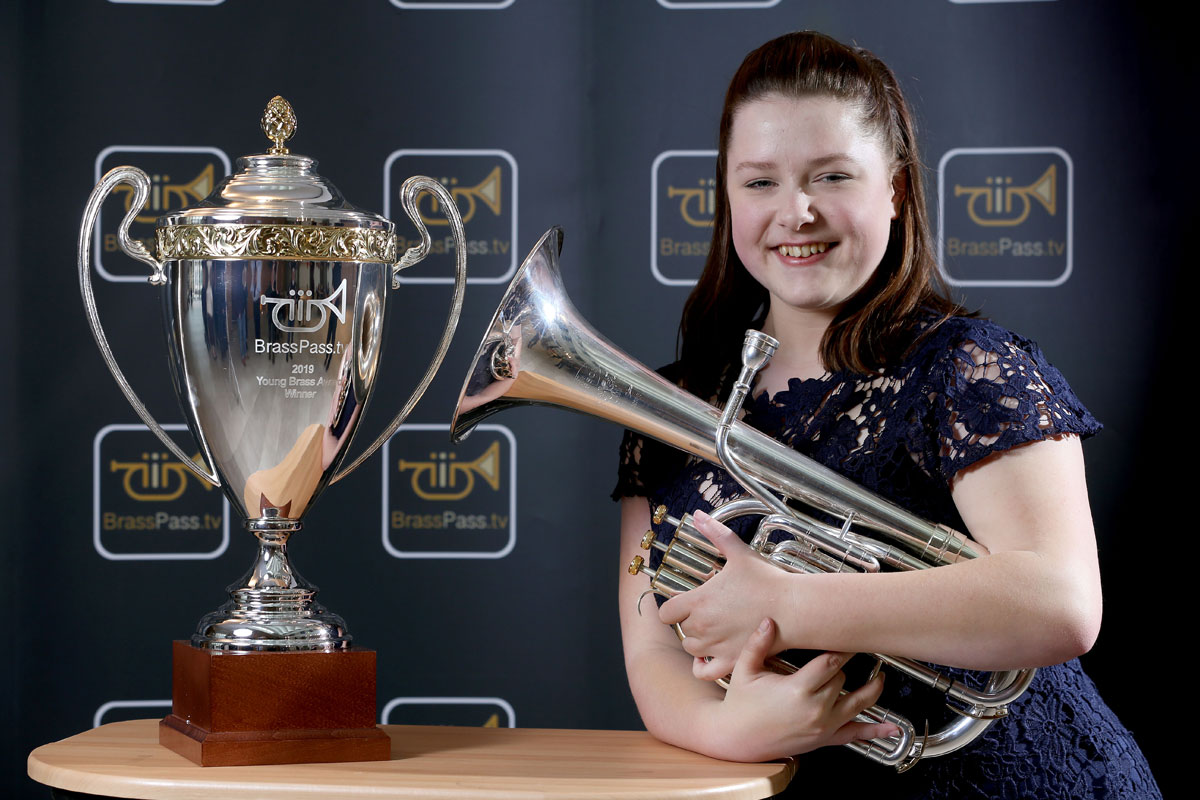 Siobhan Bates took the coveted first prize in the finals at Manchester’s Stoller Hall.  As well as studying for her BMus (Hons) at the University, she is also a member of the famous Black Dyke Band.

UNIVERSITY of Huddersfield music student Siobhan Bates is a soloist with the world’s most famous brass band, having been personally recruited by its conductor.  Now, she has been named 2019 winner of the prestigious Young Brass Award.

Initially, however, the 20-year-old tenor horn player – who joined Black Dyke Band at the age of just 18 – did not make it past the semi-final stage of the contest organised by the organisation BrassPass.tv.

“But one of the original finalists had to pull out and I got a phone call to say I had got through!” said Siobhan.  She selected her 10-minute programme – Peace by John Golland and the Finale from Fantasie Concertante by Philip Wilby – and when the final took place at Manchester’s Stoller Hall she had just 40 minutes of rehearsal time with Foden’s Band, which accompanied the finalists.

Her performance deeply impressed the judges – Dr Robert Childs, Lito Fontana and Kate Moore – and she was named the winner, over two euphonium players and a trumpeter.

The contest victory was the latest stage in Siobhan’s remarkable story of success as a brass player and also aids her mission to establish the tenor horn as a solo instrument.

She began to play as a young child in Burton-on-Trent and for over a decade she played both the tenor horn, which is almost exclusively a brass band instrument, and the French horn, which is a fixture in orchestras.

“I can express myself much more on the tenor horn,” said Siobhan.  She committed herself to that instrument and to brass banding, rising through the ranks in her teens until she joined the famous Fairey Band.

Then, at the International Brass Band Summer School, she was heard by the top conductor Professor Nicholas Childs.  He wanted Siobhan as Solo Horn in the band he directs – none other than Black Dyke, famous around the world.

“For an 18-year-old to be asked to join Dyke was just mental!” said Siobhan, and she admits that it was “scary” when she attended her first rehearsal at the band’s base in Queensbury, Bradford.

But she was soon fully immersed in the band’s music and its busy schedule, including concerts at least once a week and tours to countries including Switzerland and Japan.  She has also featured as a soloist on Black Dyke recordings.

Siobhan also aims to teach music in schools and this led to her studies for a BMus degree in Solo Performance at the University of Huddersfield, which has a vibrant brass band tradition of its own.  In fact, its band helped Siobhan to run through her pieces for the final of the Young Brass Award.

She is one of seven female players in the 30-strong ranks of Black Dyke.  “Women might still be a minority in top bands, but the old prejudices have gone,” said Siobhan.