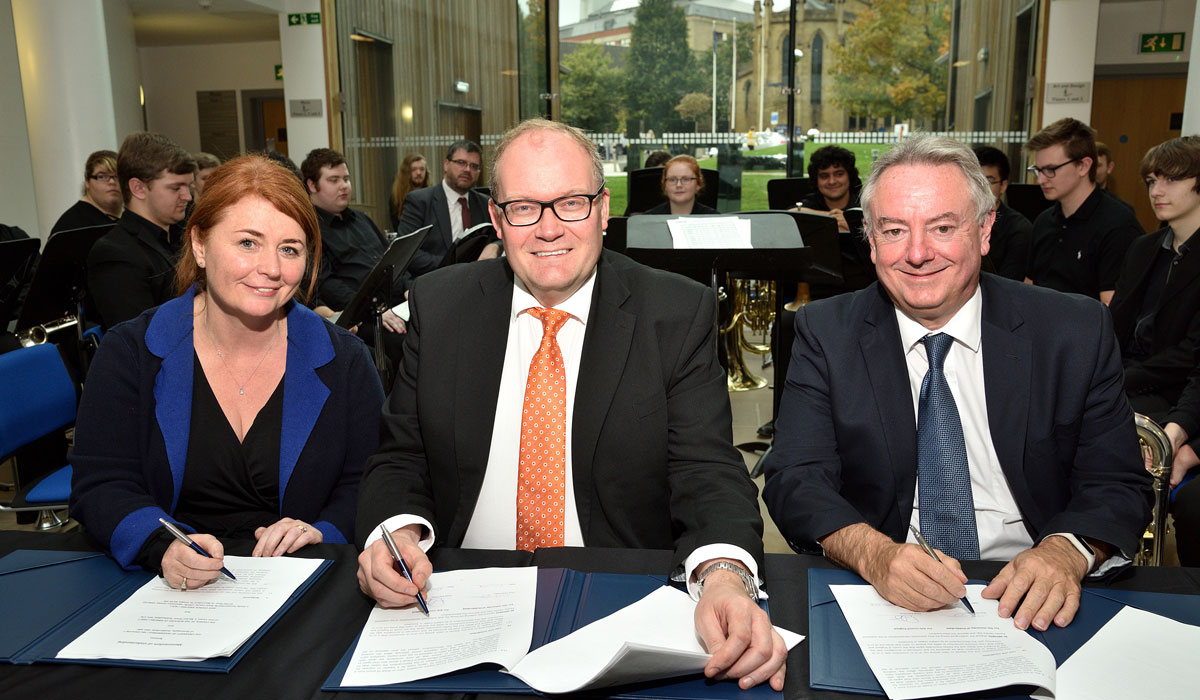 “WHEN I think Huddersfield, I think wow!” said the Chief Executive of Arts Council England when he visited the town and its university to join a unique project designed to transform the district into cultural, creative and heritage destination of global importance.

Darren Henley was at an event in the University’s Richard Steinitz Building – where its music department is based – in order to be one of three signatories to a Memorandum of Understanding that will lead to wide-ranging creative collaboration between the University of Huddersfield, Kirklees Council and Arts Council England.

Signing for the University was its Vice-Chancellor, Professor Bob Cryan, and the council was represented by its Chief Executive, Jacqui Gedman.

The collaboration will include the establishment of an action plan to bring about the objectives that could include initiating a cultural quarter in Huddersfield.  It is also aimed to ensure that university graduates have plentiful opportunities to work in the cultural and creative industries locally.

The Memorandum also has a “digital agenda”, so that the University, the local authority and the Arts Council work together supporting the creation of artistic and cultural works and content for digital platforms and distributed digitally to the public.

There is also a commitment to cultural education, promoting and supporting the engagement of young people in art and culture. 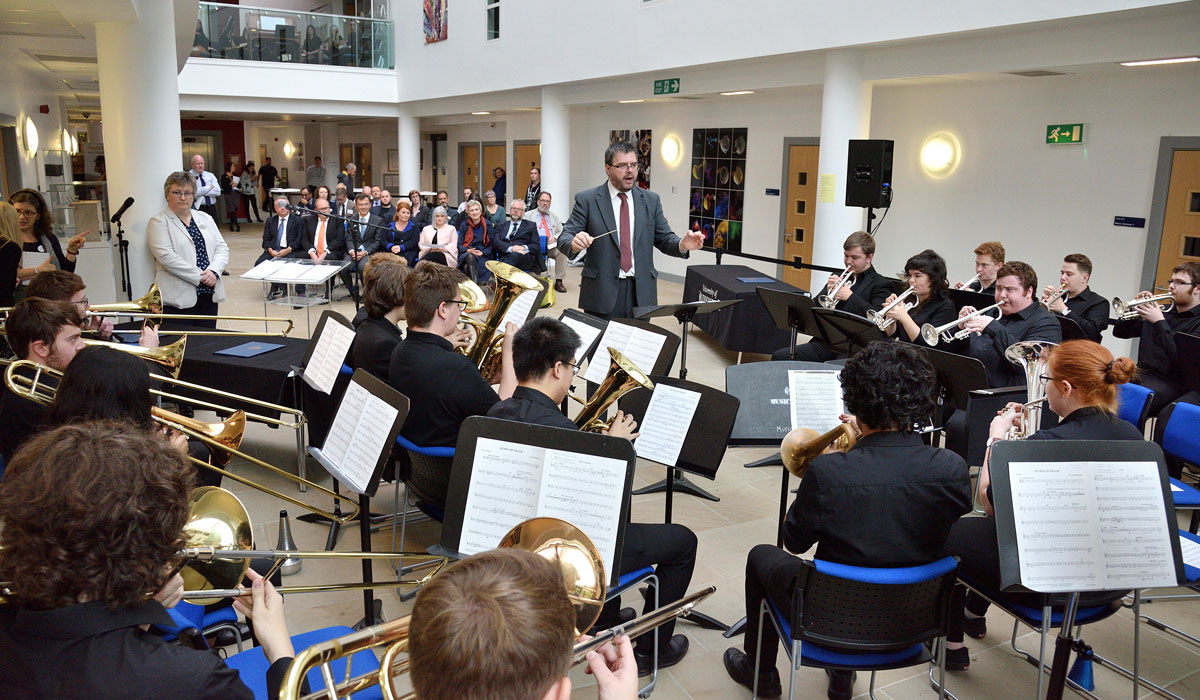 The University’s Brass Band play at the signing ceremony

As a prelude to the signing ceremony – introduced by Head of Music and Drama Professor Rachel Cowgill – there were performances by the University’s Brass Band and its Chamber Choir.

Professor Cryan spoke about the importance of collaboration to the University and told how it already worked closely with the local authority and the Arts Council.  He also described the University’s long standing traditions of education in fields such as music, drama, design, art and architecture.

“So we have a great strength in many creative fields and this is allied to our determination to act as an anchor institution that plays a central role in the economic and cultural regeneration of our district,” said Professor Cryan, adding that “the Memorandum of Understanding we now sign with Arts Council England and Kirklees Council will energise and strengthen such ambitions.”

Kirklees Council Chief Executive Jacqui Gedman said that the local authority was enthusiastic to have an opportunity to sign the Memorandum.

“The creative sector is so important to our heritage in this borough and we are very conscious that we need to create the conditions so that applies to future generations,” she said, adding that it was vital to ensure that the creative sector could thrive in the district.

Mr Henley, of Arts Council England, praised the town of Huddersfield and its “world class” university.

“You should be proud to be part of it,” he told the audience.  “It’s a very well led institution and it’s a very exciting place to be.

“Universities really are central cultural custodians and there is no greater example of that than this university, so we’re really proud to be a partner here,” said Mr Henley, who also said he was glad to partner the local authority and paid tribute to the district’s cultural assets, such as its artists.

After the signing ceremony, the guests were given a tour of the University’s facilities – including the Sir Patrick Stewart Building, its base for drama – and there was a virtual tour of the new Barbara Hepworth Building, now under construction as a major new facility for the study of art, design and architecture.