Welcome to the University of Huddersfield

This page contains important information about what to do before you arrive, things to do during your first few weeks and how to help you settle into university life here at the University of Huddersfield.

Do you need to quarantine in the UK?

Please continue to read the UK government guideline for updates. If you do have to self-isolate we have produced a self-isolation guide, to help you prepare.

Before you arrive on campus

After you have received your unconditional offer letter, you will be sent an email with instructions to start your three stages of enrolment online. Once you've received the stage 1 email, take a look at our step by step video on our Leaving for the UK page to help you pre-enrol. When you have completed this you will be sent a stage 2 email, this must be completed when you arrive in the UK. When you have submitted this form we will assess it (takes up to 3 working days) and send you a stage 3 email asking you to collect your student ID card.

Take a virtual look around campus before you arrive.

Instructions will be sent in your stage 3 email.

Register with the Health Centre

Register with the Police

Students from certain countries need to register with the Police. Find out more on our police registration webpage.

In most cases your fees can be payed in two instalments or 100% up front. See your costs, fee deadlines and what is included in your offer letter and on our fees page. Please make sure you pay by the required deadlines to avoid and disruption to your studies.

Many banks offer student bank accounts, and it is advisable to check with the bank beforehand to ensure they can offer an account which meets your needs. Whichever bank you choose, they will require proof that you are a student. You can download a self service letter yourself after you have been enrolled. You can access this via My Hud > Quick links > My details > Documents. Find out more. 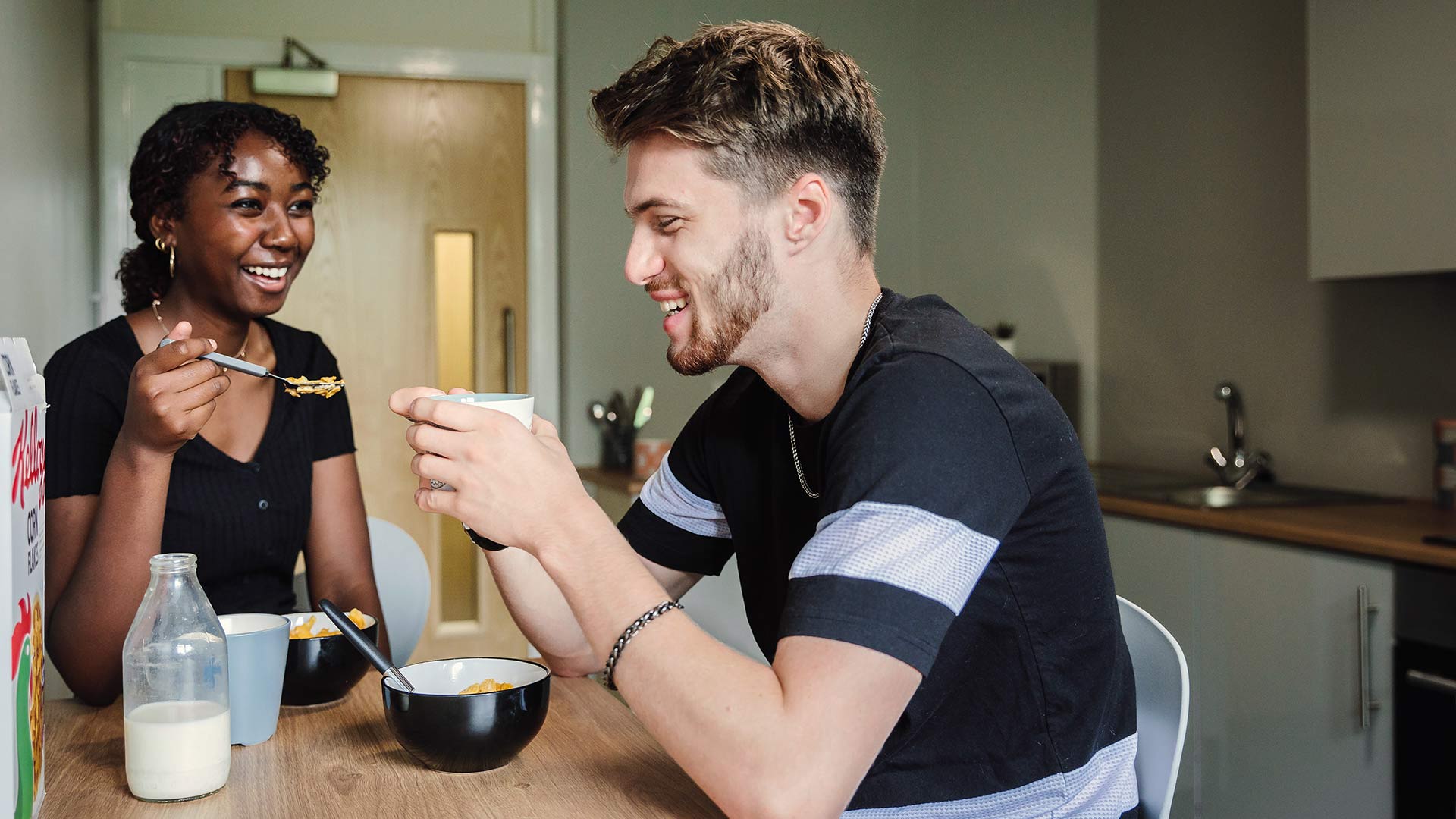 Students eating breakfast in their accommodation at Storthes Hall

If you have any non-academic queries during your studies, our team is available to talk to you Monday - Friday without an appointment at our online drop-in sessions.

We have a team of staff to support you with any student visa or immigration queries at our online drop-in sessions or email - immigration@hud.ac.uk.

ActiveHud is your place to become more active, more often. ActiveHud offers something to suit everyone from the gym to social sport, classes for fitness and wellbeing.

We have excellent on-campus facilities, including a gym with over 80 stations. The gym, swim and class offer includes access to Kirklees Active Leisure (KAL) facilities across Huddersfield and the rest of Kirklees from £18 per month. 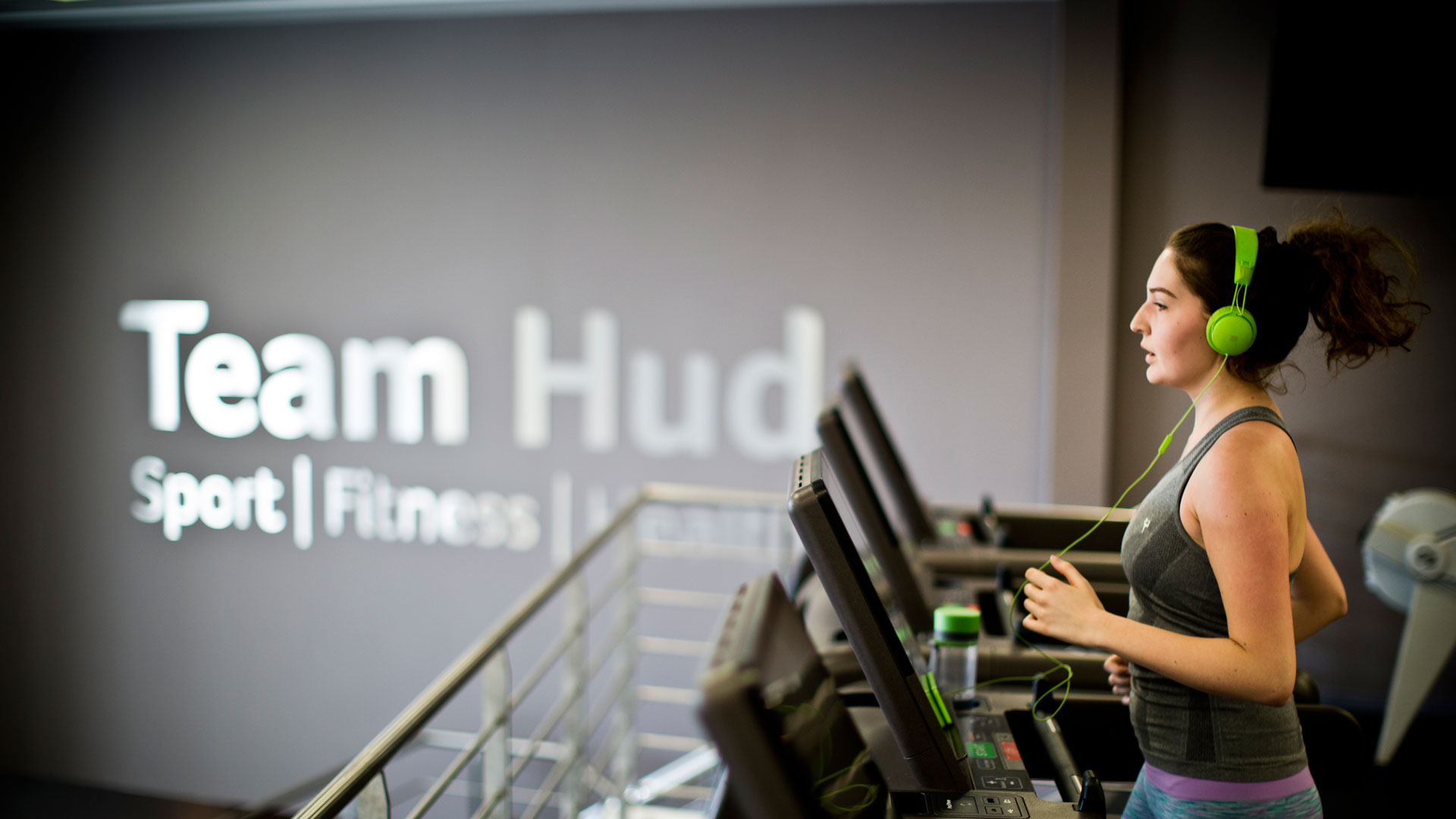 The University of Huddersfield gym.

Make yourself at home

Buy your kitchen and bedroom essentials from shops in the town centre, which sell everything you need for your new home at budget-friendly prices.

You can find most of what you need from big supermarkets like Sainsbury’s (large superstore located across the road from campus) Tesco, Asda and Morrisons. There are also smaller shops such as Lidl and Aldi in Huddersfield. You can also buy from the markets and convenience stores in the town centre. As Huddersfield is very multicultural, we also have lots of international stores located in and around the town centre.

There are lots of places to eat and drink around Huddersfield to suit your budget and taste. You'll find a huge mix of restaurants, such as Indian, Thai, Spanish, Brazilian, Chinese, Lebanese, Burmese, British, the list goes on. You will also find lots of small international cafes and street stalls. So whether you're craving a chai tea or jungle curry you can find it all in Huddersfield.

There are lots of opportunities on campus to meet new people. 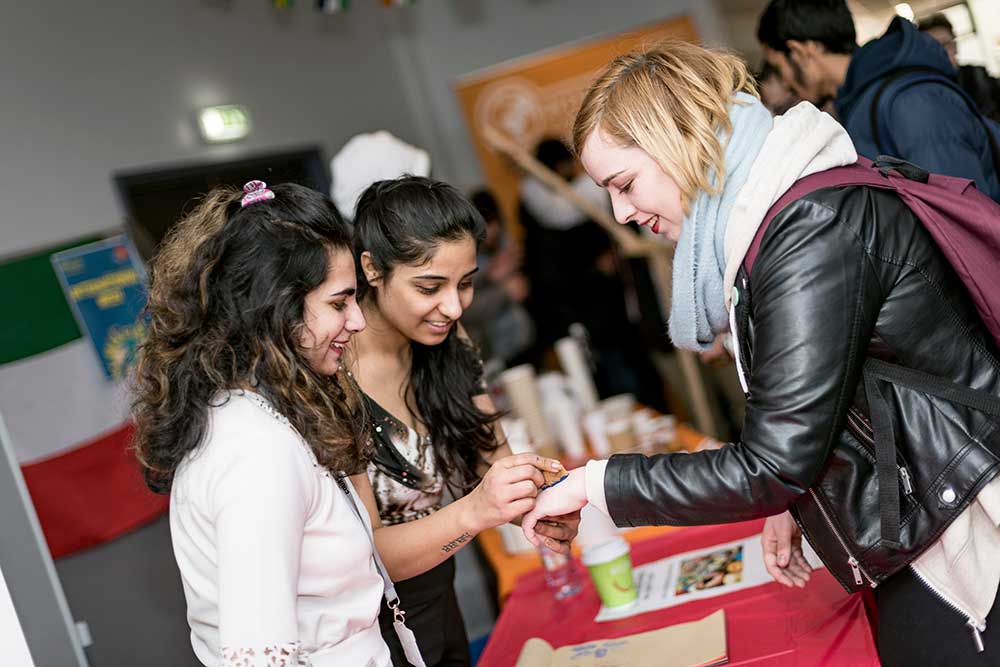 Taking part in University events and joining societies is a great way to make friends with other students.

Once you've explored our beautiful campus you can start to explore our stunning town. There are lots of student and budget-friendly things to do in Huddersfield. We have some great parks that a free to enter and walk around such as Greenhead Park and Beaumont Park. Some other areas you must visit are the breathtaking views at the top of Castle Hill, go and watch Huddersfield Town Football Club or Huddersfield Giants Rugby League at the Kirklees stadium. See a show at the Lawrence Batley Theatre or Huddersfield Town Hall, both located in the town centre. Check out some of our museums such as the Tolson Museum located in Ravensknowl Park, Colne Valley Museum and the National Coal Mining Museum.

Exploring the rest of the UK

Huddersfield is conveniently situated close to many large cities, we are sandwiched between Leeds/Bradford and Manchester. Sheffield is just south of Huddersfield and York is north of Huddersfield, all these cities are all within an hours' drive or train ride. If you prefer a more rural trip then Huddersfield is also within an hours drive to the Yorkshire Dales (voted the Best National Park in Europe in 2021 in the Trip Advisors Travellers Choice Awards), the Peak District, which was voted 4th in the same awards. We are also close to the North York Moors and within a couple of hours, you can be in the world-famous Lake District.

The weather in England, especially the north of England is well-known for being cold, however, the climate in Huddersfield is very livable, Huddersfield does not have extreme weather conditions. Be prepared that you will need a coat and some warm clothes especially if you're used to a warmer climate.

Although the weather is very changeable day to day it’s also fairly stable, it’s rare for the temperature to go above 25c (77f) and below -2c (28f). The hottest month in Huddersfield is July when the average high temperature is 20c (68f) and the coldest months are January and February with an average low of 1C (34f). Huddersfield does not have a rainy and dry season, however, during the colder winter months (December - February) we get more rainy days than the summer. The precipitation is very similar all year round, August which is our second hottest month actually has the most rainfall in terms of mm but these are usually short bursts.

In Huddersfield, we do not have tornadoes or noticeable earthquakes. Most years we will get some snow, it does vary year on year as to how much we get. Often we just get a small amount of snow, however sometimes we do get enough to build snowmen and go sledging, we don’t get loads though and it rarely impacts our life. It can snow anytime from November until April. The months it is most likely to snow in Huddersfield are January, February and March. Huddersfield is very close the Pennines and you can usually guarantee some snow at some point in the year up there.