Taking what you discover at university onto a bigger stage was the theme for recipients of honorary doctorates in the second week of graduations at the University of Huddersfield, which included comedian, writer and Huddersfield alumna Rosie Jones.

She collected her award on the final day of ceremonies, with Chinese film maker Bo Yang and business leader Paul Grimwood having also been honoured earlier in the week.

But it was Rosie who gave possibly the sagest and best-received piece of advice when she told her audience, “Never forget to have fun, go out and have a kebab!”

One of the rising stars of the UK comedy scene

Rosie has become one of the must-see acts on the UK comedy circuit in the decade since she graduated from the University of Huddersfield with a first-class honours BA in English Language and Creative Writing.

She has starred on shows including The Last Leg, Live at the Apollo, The Jonathan Ross Show, Trip Hazard and The Last Leg in Tokyo. She has written for the hit Netflix series Sex Education, had a recurring guest role in Casualty and published her first book, The Amazing Edie Eckhart, in 2021.

“It feels really emotional and I've already seen a lot of familiar faces from my time here, so I'm very happy to be home," she told the University website.

“It's a massive honour, because I hold Huddersfield very close to my heart. It's just amazing that you remember me. But secretly, I'm not allowed to say this, but I'm most excited about changing all my deliveries to Dr Rosie. The power!

“I'm actually already a nightmare, even to my friends. I'm warning them and saying 'just so you know, you're going to have to call me Dr Jones.' I think Huddersfield was the first place that I thought right I can be a writer and I'm going to bloody do this.

Rosie reflects on what the power she now has with "Doctor" in front of her name will mean to her...

“I studied creative writing and I had my first short story published when I was a student here and that just gave me the taste for it. I mean, I'm so lucky to be able to perform comedy and then do serious acting roles, but if I'm honest writing scripts and books are the things that give me the most joy and I really found the writer in me when I was here at university.

“Growing up being a gay, disabled woman, I would read a book or turn on the TV and never see myself staring back. I don't feel like I ever had a role model. So, when I started to get a platform, I was aware that I wanted to be as vocal as I could about my disability and my sexuality and just be that person that other people can look at and think 'if she can do it, I can do it'.

“I'm very aware that when I go out there and I say 'here's my experience', you may have a different one, but if you want to listen to me, learn from me and be inspired by me, good, but at the end of the day I'm just Rosie.”

Has won awards around the world for his innovative stories.

Bo Yang grew up in the city of Haerbin in northern China, close to Russia. He later moved to Xi’an with his parents to China’s West Film Factory during the late 1980s to 1990s, which is where he started developing an interest in film-making. In the early 2000s Bo moved to New Zealand to study economics, before returning to China where he worked in film and television.

His work, Loach is a Fish Too (2005), received the art contribution award at the 18th Tokyo International Film Festival. The feature film Wings (2011) and Feed me (2012) both received Innovation Awards at the 36th and 37th Montreal World Film Festival. Recently Bo has been focused on popular television series for the Chinese market.

“You have one of the really advanced studios with all the same equipment here at Huddersfield, that we are using for TV series," says Bo. "Those lights and motion cameras with spotless conditions. So, as I told of them on the tour, I kind of envy you to some degree, that the students over here can have exactly the same equipment as the real commercial equipment that we in our jobs.

“There are too many kings and heroes on the big screen or small screen, but there are not a lot of people who turn their camera towards ordinary people, like people you meet every day. They are also heroes, there are also tears and sweat happening every day, so if you put your eyes on those people every single day, you will be amazed how rich you can get from them. For me it's always celebrating the celebration of humanity. So that's why I tend to point my focus to the ordinary people."

Acclaimed film maker Bo Yang discusses how he took his skills onto a world stage.

“Back in the days when I was for the first time overseas in 2001, technology was not as advanced as today and you really had to find out a lot of things yourself and that's the whole experience, not only academically, but to have the whole experience of travel overseas.

“It basically put me in to society, with a broader aspect of society. You need to go out and have a worldwide aspect. I think that's very important and that's what I try to encourage my kids to do today. 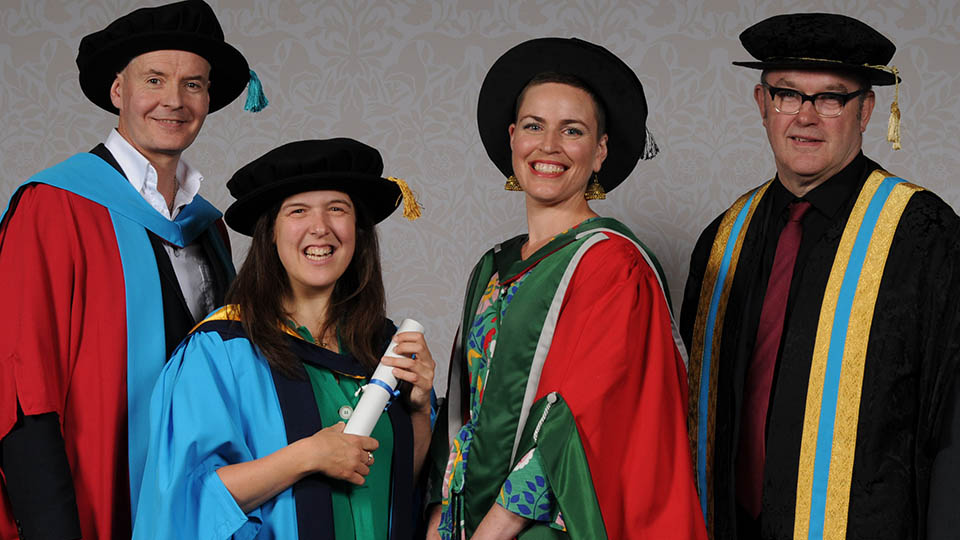 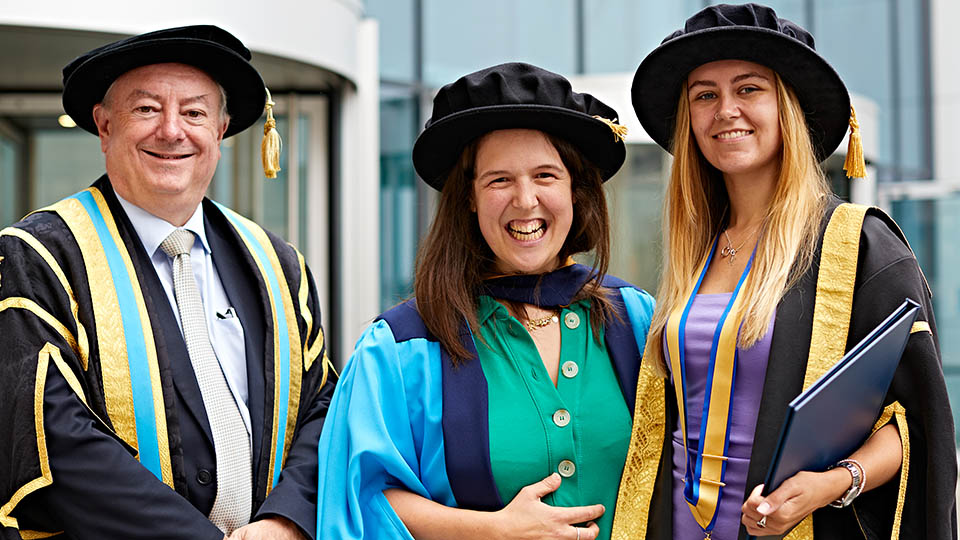 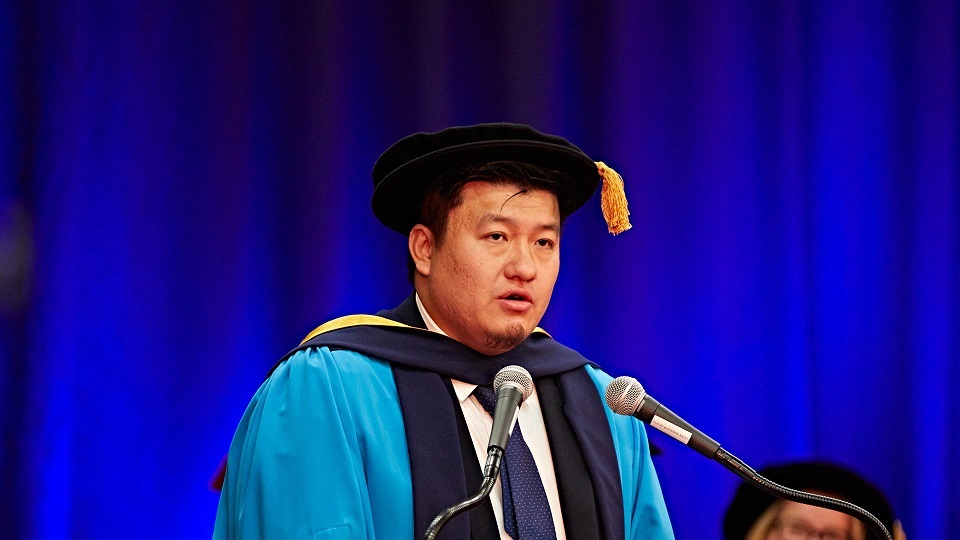 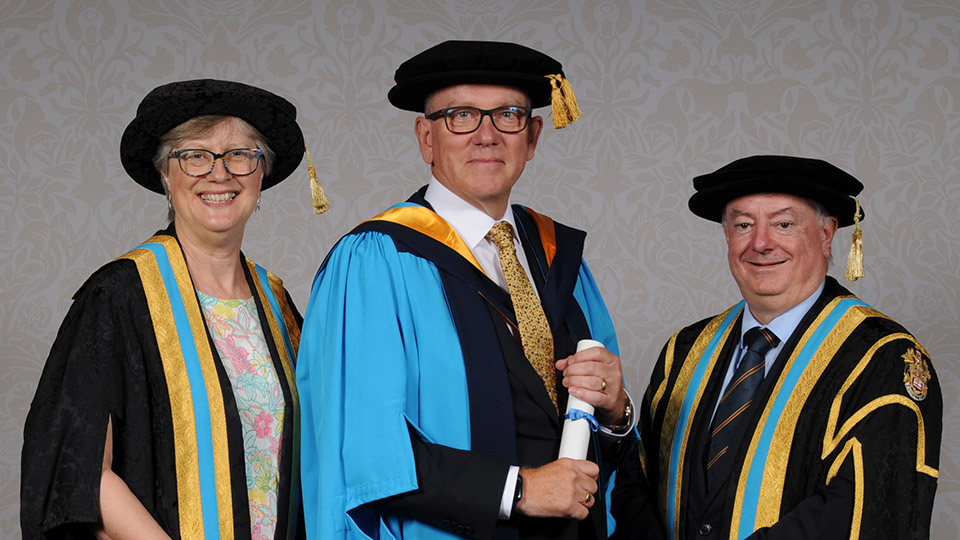 After graduating from Huddersfield in 1985 with a degree in Business Administration, Paul Grimwood has enjoyed an influential career in the food and drink industry both in the UK and overseas. After beginning as an intern at the Mars Corporation while at Huddersfield, he eventually became its Commercial Director before moving to Highland Distillers as Managing Director for the UK and Ireland.

He joined Nestlé in 2001, and in 20 years with the company in a range of senior roles, culminating in becoming Chairman and CEO of Nestlé USA, he helped Nestlé and the wider food industry develop initiatives around environmental, sustainability, nutritional and health-related issues. He was awarded with a CBE in 2018, and lives in semi-retirement in Yorkshire.

“The Mars internship framed everything that I went on to do after coming to Huddersfield. It was something that I knew I wanted to do, to work in business and I needed something that was going to give me a pragmatic introduction to the business world and a good foundation, a good grounding. But it wasn't actually until I went away and did what they called at that time a 'thick sandwich' course, which we now call an internship."

Paul Grimwood looks back to his time at Huddersfield and how important his internship turned out to be for his subsequent career.

“I went and worked for the Mars Group for a full year. And all of a sudden, everything that everybody had been telling me for year one and year two, I started to understand. And because it was a year's placement, I got a lot of great experience and some big projects to work on.

“Working in the food and drink industry for the Mars group probably set me up for the next 35 years of my career, because I stayed in that industry before finally coming to sort of semi-retirement a few years ago. So, it really was foundational stuff for me for which I'll always be very grateful. I certainly recommend anybody, first of all, to take a placement year somewhere and develop themselves hopefully in the middle of the degree.”