Footballers may be fitter than ever before but congested fixture lists are forcing players to pace themselves while team managers are forced to increasingly juggle their resources, according to new research on elite level men’s football by a University of Huddersfield academic.

Dr Liam Harper has co-authored a new paper on fixture congestion and performance with colleagues Dr Richard Page of Edge Hill University and Ross Julian from the University of Münster in Germany.

Published in the journal Sports Medicine, the findings of their systematic review and meta-analysis include that while modern players can still cover great distances in games, they are conserving energy for the kind of intense bursts that occur around a key moment.

Their research also shows how coaches, confronted with schedules that see players involved in domestic, European and international games in quick succession, are resting some players in certain positions more than others, with possible consequences for a player’s performance and risk of injury.

“There aren't any differences in total distances covered between a congested period and a non-congested period,” says Dr Harper, Senior Lecturer in Sport Exercise and Nutrition Sciences. “It seems that players can maintain that physical performance in terms of distance covered no matter how many games they've played.

“But total distance is just one gross measure of performance. Sprints and high intensity running – typically considered as over 15 km/h – are usually linked to notable actions in a game, with a German study showing that 45% of goals are preceded by a sprint. It seems that players perform fewer high intensity runs when they only have three days between games. There’s more walking and jogging.”

Fixture congestion leading to tired players is often blamed for poor performances by international teams in tournaments like the World Cup, but the current coronavirus pandemic has added more complications. COVID-19 saw domestic schedules and European competitions come to a sudden halt in March, with the Premier League and the Championship managing to finish the 2019/20 season under ‘Project Restart’ in the summer. 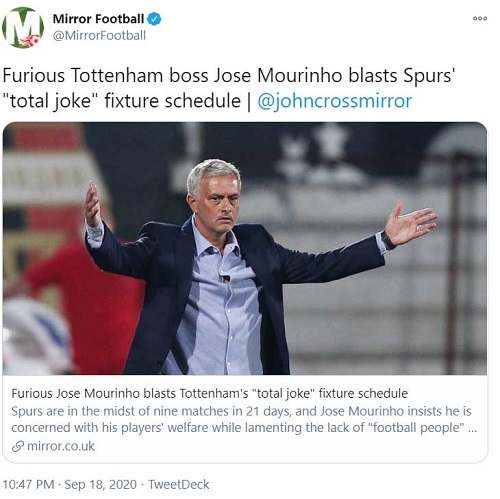 The 2020/21 campaign got under way after a short break, with international fixtures adding to the demands of domestic and European fixtures for many elite-level players. Spurs have a 21-day spell where they play seven games in the Premier League and the Europa League between blocks of international fixtures which will involve many of their squad – a typical cycle for many clubs.

Dr Harper, whose doctoral thesis looked at the effects of extra time on players’ performance, adds that, “Players are adopting pacing strategies; they reduce low intensity actions to save themselves for sprints and high intensity runs.”

If it’s Thursday, it must be the Europa League...

A typical week for a club also involved in Europe will see a Premier League game on a Sunday, followed by a Champions League game on Wednesday and then back to domestic matters on the Saturday. For those in the Europa League, the cycle is typically Sunday-Thursday-Sunday.

“Some variances preclude making robust conclusions,” Dr Harper continues, “but it seems to be that less than four days does have an impact on some aspects of physical performance.”

A 2012 study by leading Dutch coach Raymond Verheijen showed that teams with two days preparation were 40% less likely to win their next game than a team with three days to get ready. As part of the work towards the new paper, Dr Harper also commissioned Huddersfield undergraduate Sam Jones to assess how two clubs apiece in the Premier League, Championship and Spain’s La Liga managed their squads when they had less than 96 hours between games.

“Some coaches rotate key players; the percentage of those who play 75-90 mins decreases when European games are played midweek between domestic matches.

"Perhaps this shows that coaches recognise the need for players to rest, maybe have them off the bench for 30 minutes rather than play the full match. However, it might also mean that players are not available due to fatigue and injury.

"Wide midfielders and strikers in particular tend to be rotated more frequently during periods of fixture congestion. But central defenders tend not to be subbed off. This may be due to the fact they typically cover less distance and less high-intensity actions than other positions, but that does not mean they are not susceptible to tiredness and injury arising from fixture congestion.

“Indeed, whilst outside the scope of our recent research, large scale studies involving multiple clubs competing in the UEFA Champions League has shown that players are at greater risk of soft tissue injuries during fixture congestion”. 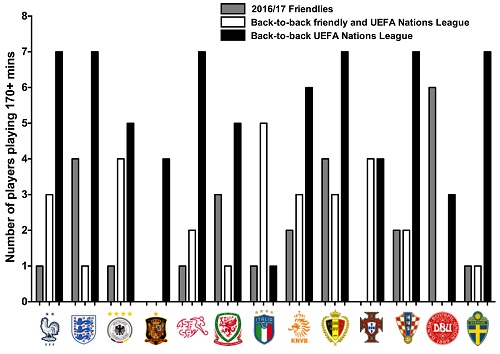 Players are involved more in competitive Nations League fixtures for their countries compared to friendlies - possibly leading to issues for their club managers.

Club vs. country increasing the load

Another factor is that breaks in club fixtures are now not just for ‘meaningless’ international friendlies. European Nations League games mean more competitive matches with future prospects hanging on them, increasing the chances that players will be playing demanding top-level games for their countries just a couple of days before they are in action for their clubs.

Liverpool manager Jurgen Klopp called the Nations League “senseless” in 2018, and Jose Mourinho called Spurs’ eight games in 21 days start to this season “a joke”. Mourinho’s side conceded three goals in the last 10 minutes of their first match after the October international break – with three Spurs defenders having played in most of two international games apiece in the preceding week and a half before playing all 90 minutes of the 3-3 draw with West Ham.

Will players lapse at the key moments?

Dr Harper’s study points towards players being just below their best due to their busy schedules, and this being crucial at the key moments in games – a missed tackle, or being caught out of position and allowing an opponent a chance to score. A study involving Liverpool looked at where players were positioned in relation to where they should be, and found differences for players with games in quick succession.

“In a congestion cycle, synchronisation between players might reduce. For example, the distance between a right back and a right winger might become greater. Then, the right back doesn’t recover as quickly, is more exposed to counter attacks, and opponents might find more space on their left flank. The defensive midfielder might have to work more, and the team gets pulled around.

“We need to see more of this – it’s key information for coaches in a congested cycle. Is their system going to be different because their players are going to be tired, and so do they need to adapt? Preparation for every game is going to be different according to the strengths and weaknesses of the opposition. A combination of fatigue and less time to work on tactics and shape during fixture congestion makes the coach’s job even harder.”

High-intensity workouts more popular than before

Though HIIT workouts might be short, research shows they’re just as effective as longer endurance workouts for our health and fitness.

Abuse & threats part of the job for refs

Research looks at the causes, effects and coping strategies for football referees who suffer abuse and threats.

The tricks of coping with World Cup extra-time

What can teams do to overcome the increased fatigue and stress of that extra 30 minutes?