The Holocaust Exhibition and Learning Centre is one of the finalists in the 25th Birthday National Lottery Awards and has been selected in the Best Heritage Project category.  Public voting has now started.  Click here to vote. 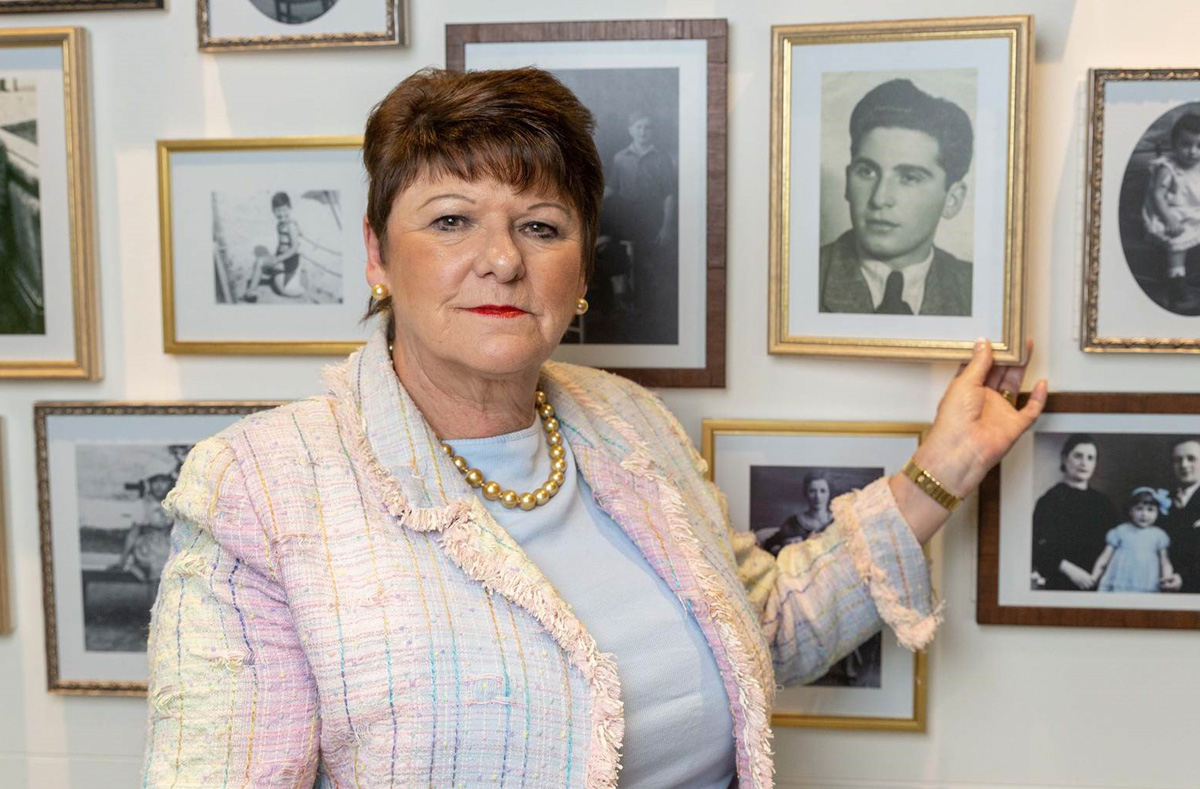 Pictured is Chair of the Holocaust Survivors’ Friendship Association Lilian Black at the Holocaust Exhibition and Learning Centre with the photo of her father, Holocaust survivor Eugene Black - CLICK HERE to vote for the Centre in the 25th Birthday National Lottery Awards.

ASK Lilian Black what her late father, Eugene, would have made of The Holocaust Exhibition and Learning Centre (HELC) and she takes a moment to consider.  “If he had seen this place he would have been amazed,” she says.  “To say he would have loved it is not the right term, but he would have been proud that we’ve been true to the memory of millions of people who did not survive.  He always had them at the forefront of his mind.”

Eugene, who died in 2017 at the age of 88, is one of 16 Holocaust survivors and refugees whose stories are told at the HELC located on the campus of the University of Huddersfield.  Some of them, like Eugene, were liberated from Nazi concentration camps at the end of the Second World War; others arrived in the UK before the war began.  But each of them made a new life in Yorkshire.

The HELC, a £1.2m initiative which was partly funded by The National Lottery Heritage Fund, opened to the public in September, 2018.  It tells a powerful story using photographs, animated maps and filmed testimonies from survivors of the Nazi attempt to exterminate the Jews of Europe.

Lilian is the Chair of the Holocaust Survivors’ Friendship Association (HSFA), the Leeds-based charity that campaigned for a permanent facility that could protect the legacy of survivors and act as a research and education centre for students.  It was the HSFA that obtained a £50,000 grant from The National Lottery Heritage Fund in 2009 to fund the filming of survivors as they told their stories.

The resulting films were powerful, but the HSFA was “still concerned with the legacy going forward,” says Lilian.  “We were painfully aware that there were no resources in the North of England for Holocaust teaching, learning and research.”

A second National Lottery Heritage Fund grant of £159,600 awarded in 2010 helped the HSFA train a team of volunteers to begin collecting documents and artefacts from Holocaust survivors.  As the collection grew, the idea of a permanent exhibition and education centre gathered momentum.  The University of Huddersfield proposed a site on its campus overlooking a canal.

“I asked the University quite frequently ‘are you sure about this?’” says Lilian.  “The Holocaust can sometimes attract things that you might not want to be involved in.  But they were adamant that they had the values and the infrastructure and they wanted to do this.”

When The National Lottery Heritage Fund telephoned Lilian in 2015 to tell her she had been awarded £663,700 towards the creation of the HELC she was astonished.  “I screamed,” she says.  “We genuinely didn’t know if we would get it.”

Vote for The Holocaust Exhibition and Learning Centre in the 25th Birthday National Lottery Awards – Voting runs from 9am on 24 July until midnight on 21 August.  You can also follow the campaign on Twitter: hashtag #NLAwards.

Since The National Lottery’s first draw took place on 19 November 1994, more than £40 billion has been raised for good causes in the areas of arts, sport, heritage and community.

Further funding for the HELC was obtained from the Pears Foundation, The Association of Jewish Refugees, The Toni Schiff Memorial Foundation and individual donors.

Items on display at the HELC include a yellow star that Jews were obliged to wear in Nazi Germany and occupied Europe.  Visitors can also see a pair of shorts worn by Tom Kubie who came to the UK as a refugee from Czechoslovakia with his family in 1939.

A uniform that once belonged to a Polish prisoner held at the Mittelbau-Dora concentration camp in Germany was transported back to Huddersfield in the boot of Lilian’s car along with several bowls once used by prisoners.  “I had these boxes in the boot of the car and I was terrified,” she says.  “I drove at a snail’s pace all the way back.”

Such artefacts are particularly precious, says Lilian, because Jews liberated from concentration camps at the end of the war had usually lost all of their possessions.  “That was a challenge for the exhibition – how do you communicate loss?” says Lilian.  “You’re liberated, but you’ve lost everything.”

The HELC has become a well-used resource for colleges and primary and secondary schools in the North of England who want to teach students about the Holocaust.  “The interest is amazing,” says Lilian.  “This week we had eight students from China in here who had never heard about the Holocaust.  We have interfaith groups such as the Council for Christians and Jews and private companies.”

One of the most powerful messages conveyed by the HELC is the determination of many of the Holocaust survivors to live their lives to the full despite the horrors they had endured.

Eugene’s parents and two aunts were killed by the Nazis and he was held at camps including Auschwitz-Birkenau and Mittelbau-Dora where he contracted pneumonia after enduring months of forced labour.  Yet he rebuilt his life in Yorkshire where he raised a family.  “It’s so important to always remember, live and let live because we are only here for a short while and enjoy while you’re here,” he once said.

Eugene was liberated from the Bergen-Belsen concentration camp on 15 April, 1945.  Three years later, he spotted an English woman who was in Germany with the British armed forces as part of the reconstruction effort.  They fell in love, got married and made their first home in Manchester.  Eugene got a job as a porter at Marks & Spencer and rose through the ranks to become a manager.

“He worked very hard and was very talented.  I went to eight schools because we moved around,” says Lilian.  “His first appointment as a manager was the Huddersfield M&S and I remember getting off the train at the station with one of my brothers holding his hand and my baby sister in a basket.  He made his life in Yorkshire – it was where he felt his home was.”

Lilian says her father never believed he survived the Holocaust because he was stronger or fitter than others.  “For him and many survivors it was just luck of the draw,” she says.  “That you weren’t standing in the wrong place at the wrong time.”

The key message of the HELC, she says is that we need to know our history.  “Unless we do, the danger is that we will repeat it,” she says.  “We can’t let the Holocaust happen again.  Whether you’re an individual or a business think about values and the kind of world we want for our children.  Do your best and never give up.”

Photographing the Holocaust – the Auschwitz Album

Arek Hersh was born in Poland in 1928, but from the age of eleven the Jewish boy was sent by the Nazis to his first concentration camp