The scheme, titled Mobility and Training for beyond 5G Ecosystems, and will be led by Dr Pavlos Lazaridis 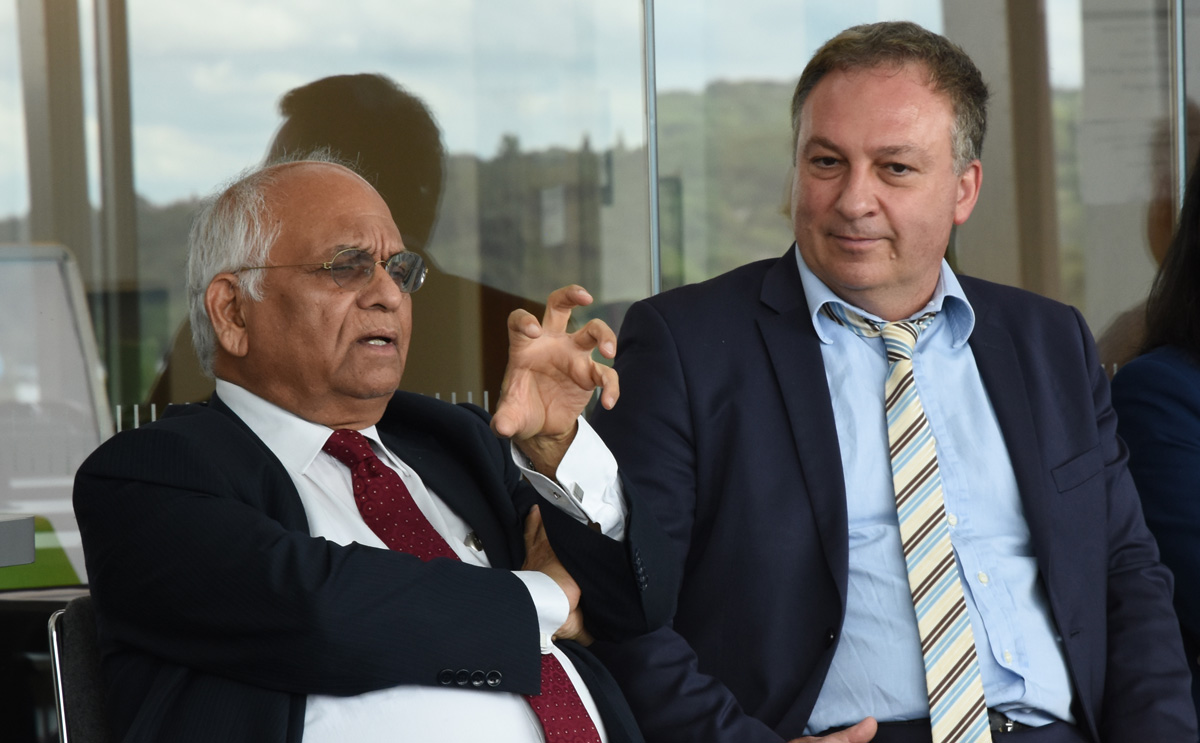 Dr Pavlos Lazaridis (right) is pictured with the President of the CTIF Global Capsule, Professor Ramjee Prasad, at the recent CTIF Conference, entitled ‘5G and Beyond: techno-business innovation’.

A NEW generation of experts in 5G networks will be trained by the University of Huddersfield, which has been awarded funding of more than a million euros for its central role in a Europe-wide project involving ten academic and industrial partners.

There will be a focus on embedding artificial intelligence into 5G systems, the use of drone-based technology to improve communications, and new “beam-forming” antennae that will direct a separate beam towards every phone user.  Researchers will also have opportunities that include an experimental 5G network at the Olympic Stadium in Athens.

The scheme is titled MOTOR5G, which stands for MObility and Training fOR beyond 5G Ecosystems.  The EU’s Horizon 2020 programme was deeply impressed by the proposal document, awarding it a rare 100 per cent rating and confirming total funding of 3,979,000 euros, of which the biggest single share – 1,212,690 euros – will be allotted to the University of Huddersfield.

Its Reader in Electronic and Electrical Engineering, Dr Pavlos Lazaridis – a key member of the consortium – will be a joint supervisor of four fully-funded doctoral researchers to be appointed to MOTOR5G, alongside Reader in High Performance Computing Dr Violeta Holmes plus senior lecturers in Electronic Engineering Dr Qasim Ahmed, Dr Faheem Khan and Dr Maryam Hafeez.

The PhD researchers will be based at the University of Huddersfield for lab work and theoretical study, but will also spend significant amounts of time with the project’s partners, and the aim is that they will advance the state of the art in many dimensions of 5G.

For example, they will research antennae at the HQ of Munich-based Rohde & Schwarz – leading manufacturers of information and communications technology products – and will train in metrology at the UK’s National Physical Laboratory.

Another of the highly-varied opportunities for the MOTOR5G researchers will be their involvement in a 5G-based video production and distribution network to be set up in the Olympic Stadium in Athens.

In addition to their technical training and research work, the MOTOR5G appointees will also develop their communication skills, making presentations at conferences and working with a wide range of partners.

MOTOR5G was unveiled and discussed during a session at the two-day event titled 5G and Beyond: techno-business innovation, which took place at the University of Huddersfield, under the aegis of the CTIF Global Capsule, an international network with a mission to develop interdisciplinary research in information and communications technology.

Among those taking part were representatives of several MOTOR5G partners.  Alongside Dr Lazaridis, they included Professor Ramjee Prasad and Professor Peter Lindgren of Aarhus University in Denmark, Dr Zaharias Zaharis of the Aristotle University of Thessaloniki and Professor Tian Hong Loh of the National Physical Laboratory.

The network was entitled ‘5G and Beyond: techno-business innovation’