Former European Union ambassador and political adviser Mikael Barfod is a visiting professor with the University’s None in Three Global Research Centre.  He was invited to voice his growing concerns for the United Nations at a public lecture where he spoke against the threats posed to the UN by populist politics around the world.  His talk was entitled ‘Filling the vacuum: who will save multilateralism?’. 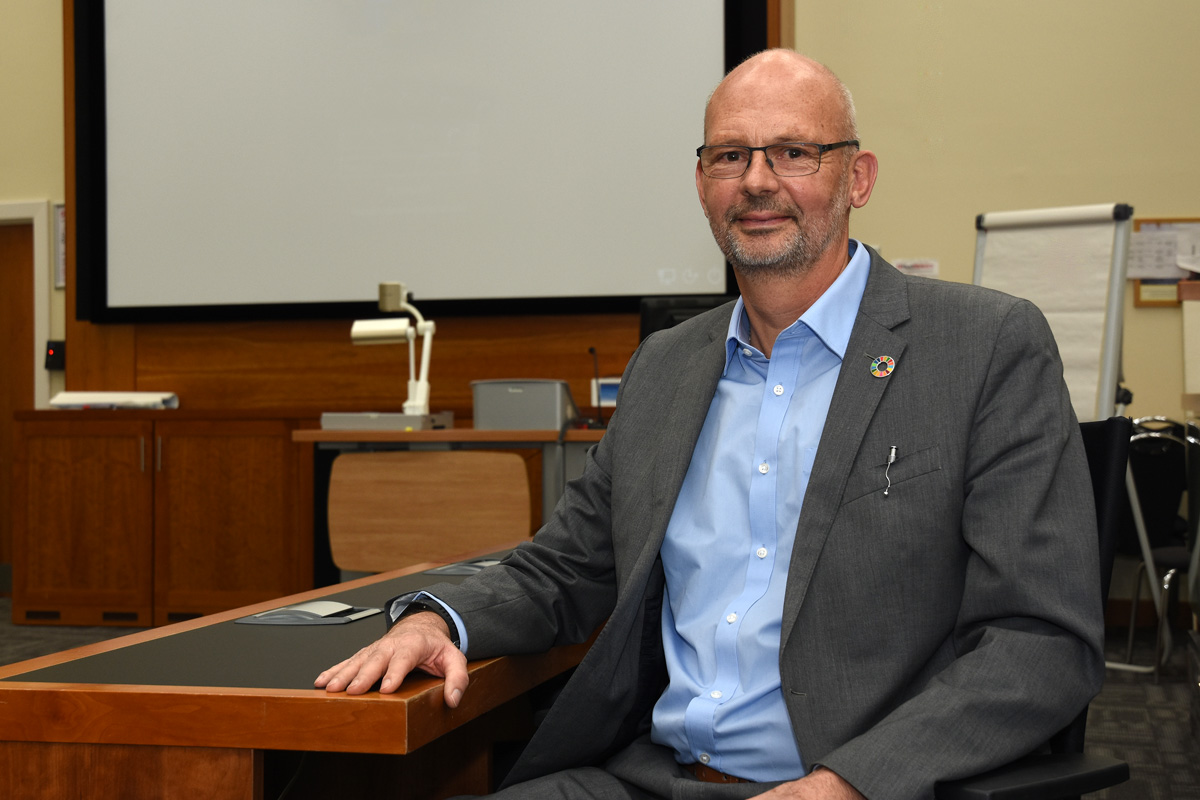 A FORMER European Union ambassador and political adviser criticised current populist political thinking, which he argued is diluting the powers of the United Nations to find answers to major global issues.  He urged for greater multilateralism and a bigger role for the EU.

In his public lecture, Mikael Barfod said that the one organisation that could influence a greater balance and offer greater consensus amongst world powers would be the European Union.

Mikael Barfod has established an international reputation over many years as a skilled political scientist working for the United Nations in Zambia and the Philippines and later as an economic advisor with the EU in Liberia and Zimbabwe.  For over 20 years, he was a managerial specialist with the European Union with responsibility for humanitarian and developmental affairs in Africa, the Caribbean and the Pacific, with a regional portfolio of around €3 billion.

His international experience led to a deep commitment for the promotion of human rights and it was during his time as EU Ambassador for the Eastern Caribbean that he became aware of the University’s None in Three (Ni3) Global Research Centre.

The Centre received a grant of £4.5million from the Global Challenges Research Fund in 2017 for a project to reduce domestic violence using ‘pro-social’ computer games to help educate young people.  The project is currently operating in India, Jamaica, Uganda and UK and is looking to expand to other parts of the world.  Mikael Barfod, who is now retired from the EU, sits on the Ni3 International Advisory Group and is a visiting professor at the University.

Through his experience at the UN and EU, Mikael Barfod has embraced a firm belief in a multilateral approach to tackling world issues and, as part of this, he also believes that the United Nations can still be a catalyst to solving them – “for all its flaws, the United Nations remains the most legitimate global body and is uniquely suited to serve as forum to address the world’s problems”.  However, he despairs at the growing emergence of the populist agenda adopted by some countries, in particular, the United States.

In his talk – entitled Filling the vacuum: who will save multilateralism?, arranged by the Ni3 Research Centre – Mr Barfod was highly critical of the autocratic leadership adopted by administrations in America, particularly the current one, and its withdrawal from key UN measures around human rights and global warming.  He warned that the U.S. had even threatened to withdraw from the United Nations altogether.

Though, stressed Mr Barfod, the United States is not fully united itself on the populist approach with pockets of opposition in the country offering a small measure of balance.  His real fear is that, with President Trump “as a Sugar Daddy” for the success of populism, other countries may follow.

A possible saviour, he argues, is the one organisation that embraces multilateral thinking by its very nature and that he feels is the EU.

“The European Union understands the value of the United Nations and is likely to continue exerting significant pressure on the UN to reform itself, to be equipped to face modern threats,” says Mr Barfod.  “The European Union has a self-interest in leading the way into more collective multilateralism, indeed the EU depends on effective multilateralism.

“And in turn, the EU could help to encourage the United States to turn back to its traditional role in the future.”

And, despite leaving EU membership, Mr Barfod also feels the United Kingdom will have a major role to play.  “It has a lot of influence within the United Nations and it would seek to work very closely with the EU to unite the UN and would also be keen to see a multilateral approach.”

Following his talk, Mikael Barfod took questions from the floor.  He was introduced by the University’s Deputy Vice-Chancellor, Professor Tim Thornton, who praised the speaker for his contribution to promoting the rights of women and children through his appointment as a visiting professor to the None in Three Global Research Centre.