The disaster risk research has been granted £541,655 and will ultimately improve the lives of the 3.5 million people living along the river

The residential areas surrounding the Ciliwung River Basin are regarded as the most densely populated in the region.

AN INTERNATIONAL project featuring two Professors from the University of Huddersfield has secured over half a million pounds to conduct research into improving the river management of the Ciliwung River Basin in Indonesia, which is often overflowing and inundating parts of Jakarta.

Professor Richard Haigh and Professor Dilanthi Amaratunga, from the Global Disaster Resilience Centre in the University’s School of Art, Design and Architecture, are experts in reducing the hazards of the built environment after a major disaster has occurred.  The project will ultimately improve the lives for the 3.5 million people living along the river basin which is regarded as one of the most densely populated areas in the region.

The three-year research grant of £541,655 is funded by the UK’s Natural Environment Research Council (NERC) and Economic & Social Research Council (ESRC), and Indonesia’s Ministry of Research, Technology and Higher Education of the Republic of Indonesia (Ristekdikti).

The proposal builds on the long-term engagement by Professor Haigh and Professor Amaratunga with Assistant Professor Harkunti Rahayu (pictured below) from the Bandung Institute of Technology in Indonesia, with whom they have worked on several EU Erasmus and British Council Newton projects.

Also working on the Ciliwung River Basin will be researchers from the University of Swansea and the School of BMKG at Indonesia’s Meteorology Agency.

The study will tackle transboundary management arrangements along the entire river, which crosses two provinces, and four municipal boundaries.

The project will examine how and why the current transboundary river management arrangements are mitigating or exacerbating flood hazard impacts in urban and peri-urban areas of the Ciliwung river basin, taking into account the key physical flood variables and any future changes to statistically significant future flood variables. 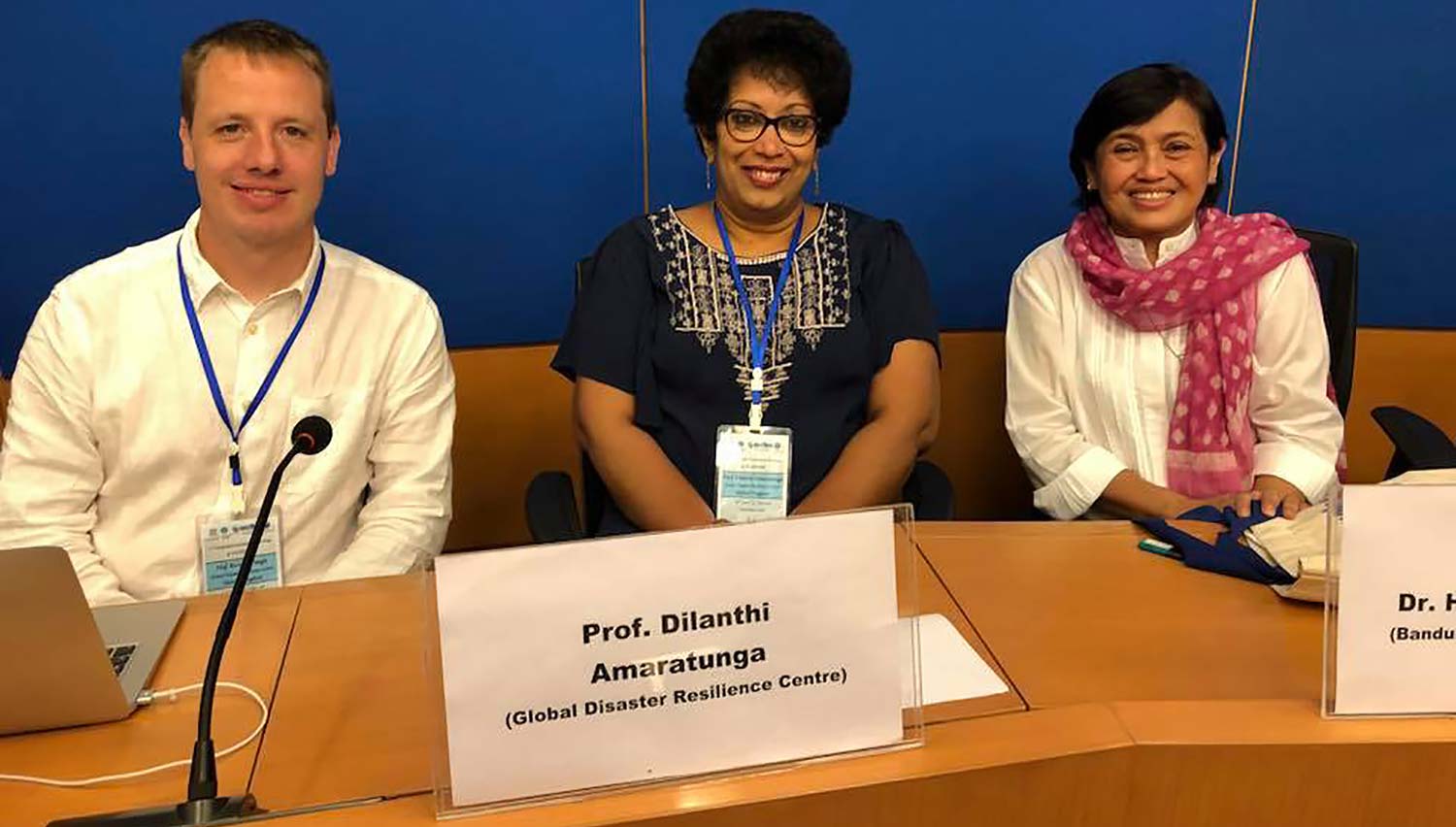 Supporting the entire team are a strong group of end-user partners, including (in alphabetical order);

The results of the study will identify the environmental, socio-economic, political and organisational landscape that contribute to, and link with flood risk. By working closely with river basin stakeholders, the results will be used to inform improved transboundary river management arrangements.

Professor Haigh hopes the project will be used as a future model in tackling similar flood risks that could inform governance of river basins elsewhere.

The training was entitled Indian Ocean Wave 2018 for Sri Lanka and was an Indian Ocean-wide tsunami warning and communications exercise .

€390k project for rebuilding after displacement

Leading roles for the co-Director of the GDRC