Simon’s work with the Catapult centre is to develop the cyber-security readiness of Yorkshire SME and citizens. That is to develop their understanding of security risks, as well as provide them with practical advice and software tools to increase the security of their systems and to be less vulnerable. Simon’s primary area of research is in the use of Artificial Intelligence within cyber security, particularly in the area of security controls and vulnerability assessment.

The project was to develop a mechanism to detect a phenomena with access controls called permissions creep. Permissions creep appears as a result of when employees change job role and their permissions (directories, software, printers, etc.) are elevated. Organisations often have systematic processes in place for allocating permissions for new users, but ad hoc permissions are often made during role changes. After many successive ad hoc changes, a user’s permissions may have become high, allowing them unrestricted access to system resources, which could have significant implications if their account was to be compromised or they accidently execute malicious software (viruses, ransomware, etc.). Detecting instances of permission creep is very challenging as determining what is an excessive level of permissions requires a high-level of expert knowledge. The project resulted in a novel tool, which utilises an unsupervised learning algorithm, to automatically detect instances of permissions creep.

Future information and software tools are available at: http://selene.hud.ac.uk/scomsp2/creeper 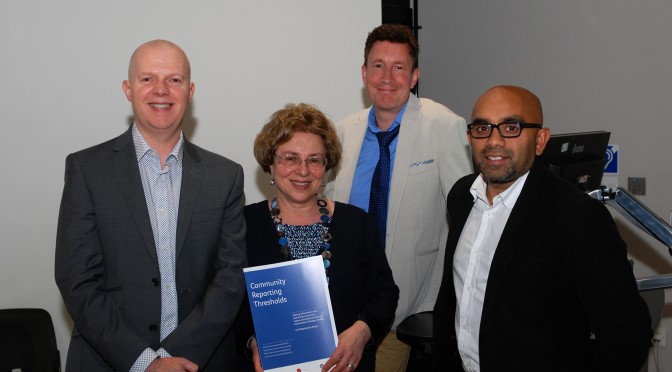 The first people to suspect or know about someone becoming involved in planning acts of terrorism, including involvement in overseas conflicts, will often be those closest to them.

While these friends, family and community insiders offer a first line of defence, very little is known about what it means to them to report the potential involvement of an “intimate” in violent extremism. This means that ‘intimates’ reporting is currently a critical blind spot in international attempts to counter violent extremism.

Paul Thomas, who is Professor of Youth and Policy at the University of Huddersfield, has researched a wide range of community issues, including the Prevent programme that is designed to halt extremism. Now, he and Visiting Professor Michele Grossman (Deakin University , Melbourne, Australia) have together headed a major new research project titled Community Reporting Thresholds. The research was funded by the Centre for Research and Evidence on Security Threats (CREST) and intended to develop an earlier Australian study by Professor Grossman.

The research team, which also included University of Huddersfield researchers Dr Shamim Miah and Kris Christmann, carried out a national series of in-depth interviews where interviewees from communities were taken through a series of scenarios based on real-life cases. They were asked what their feelings would be, what dilemmas they would face and what course of action they would take if they had information about a relative or friend involved in terrorism. The researchers also interviewed professional practitioners, including counter-terrorism police officers, Prevent coordinators based in local authorities and key workers from Muslim community organisations.