Student paramedics at the University of Huddersfield have taken part in a realistic mock-up of a traffic accident in a unique event on campus to help mark the first-ever International Paramedics Day.

Including those watching the mock-up incident were Professor Jane Owen-Lynch, Pro Vice-Chancellor, and Halifax MP Holly Lynch, who is a prominent advocate for the emergency services.

Discover more about Paramedic Science at the University of Huddersfield

The student paramedics, working as four separate crews, put their learning into practice in a highly realistic scenario that included an actor and mannequins playing the parts of accident victims, positioned in and around the wrecked vehicle stationed in the area between the Richard Steinitz and Schwann buildings on the campus.

Some student paramedics had taken part in a similar scenario inside the University’s Institute of Railway Research early in 2022, as well as visiting North Yorkshire Fire Service’s training facility for an accident mock-up in April.

Sakina Waller, Senior Lecturer in Paramedic Science, said, "As a team, we were keen to celebrate the first International Paramedics Day and take the opportunity reflect on why we are proud to be a paramedic. We offer three full-time courses at the University of Huddersfield, and we wanted to use this day to recognise and celebrate the contributions of our current learners, our alumni and those who support course delivery.

"The Road Traffic Collison scenario on campus was our opportunity to promote the profession and acknowledge the difference paramedics make to people's lives. Current students were demonstrating high quality, person-centred care for casualties at the scene, and academic staff were providing an accompanying narrative of the patient assessment and interventions being used to effectively manage the patients. We wanted attendees to get a better understanding of the work that paramedics do in this situation and the vital role they play."

The student paramedics and members of the local blue light services, plus Holly Lynch MP fourth from the right.

The inaugural International Paramedics Day is held on 8 July to commemorate the birth of Dominique-Jean Larrey, the French military doctor who was Napoleon’s chief surgeon and is often referred to as the ‘father of modern-day ambulance services.’

Chris Bell, WYFRS Reduction lead for Kirklees said: "WYFRS are thrilled to play a part in celebrating the first ever International Paramedics Day. We really value all our blue light partners, so it’s great to see them recognised with an international day of celebration. We are proud to be working in partnership with the University of Huddersfield in supporting the event. 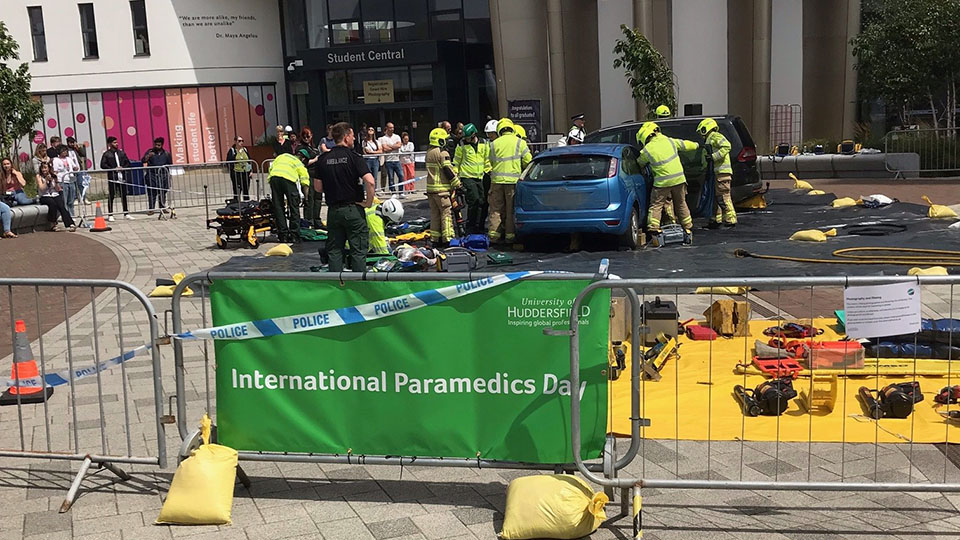 Holly Lynch added, "With parents who have been in the emergency services, I have always tried to be an advocate for the incredible people in our emergency services when in Parliament. To be here and see up close about what our student paramedics can do alongside the other partners in the  emergency services is a real privilege. It's a celebration of everything they do that is incredibly special. We ask them to run towards danger when everyone else is running away, so as an opportunity to pay tribute to them I was very keen to be here."