‘Play to your strengths’ and ‘it’s in your hands to make the most of your opportunities’ were among the key messages from the recipients of honorary degrees in the first week of July’s graduation ceremonies at the University of Huddersfield.

The honoraries included an Oscar winner, someone who has mixed records for some of the most famous acts in the world and one of the most influential women working in engineering.

And in John and Ian Warhurst, two local brothers who returned to the University for honorary awards to add to the degrees they achieved in the 1990s.

Angela advises the University's None in Three research centre

Angela is the Commissioner for Gender and Women’s Affairs in the Ministry of Gender, Labour and Social Development in the Government in the Republic of Uganda.

Her ground-breaking work on combatting violence against women and children plus gender equality and women’s empowerment in Uganda has led to Angela advising the University of Huddersfield’s None In Three initiative (Ni3).

“There is no prosperity without peaceful co-existence but you have to make it happen so that all women and children can enjoy a violence-free home, communities, schools and the nation at large. I am honoured by this award, it is an inspiration to take my work from Africa to a higher level.

“Working together we can do better, and the COVID context has taught us lessons that whatever happens in the private has a lot of influence on what is happening in the public.

“Change starts with me and you saying no to sexual-based gender violence.”

Angela Nakafeero discusses how the None In Three project has had a significant impact in Uganda. 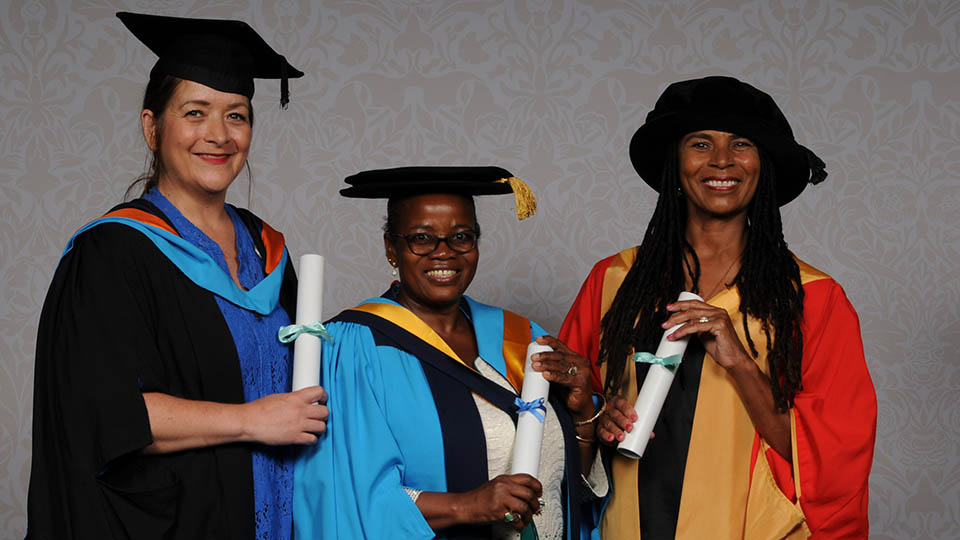 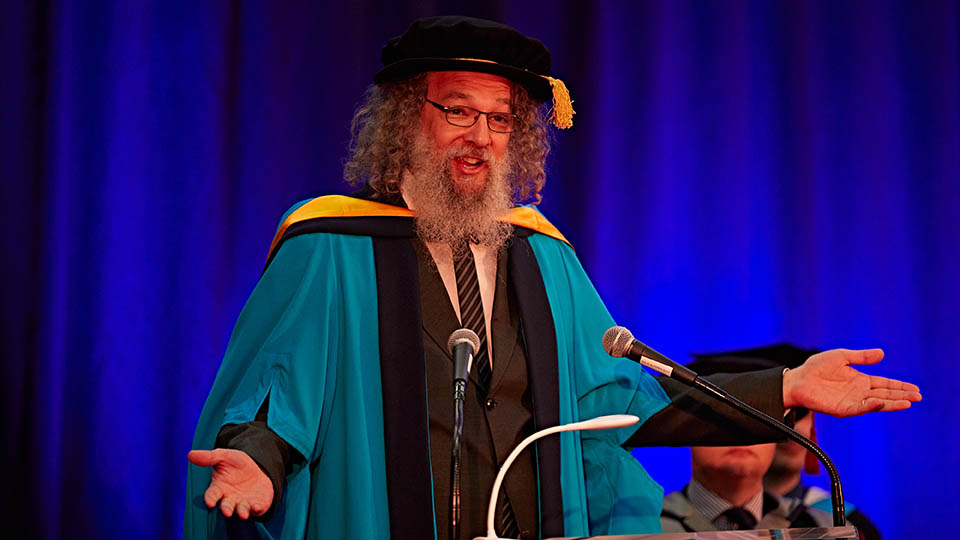 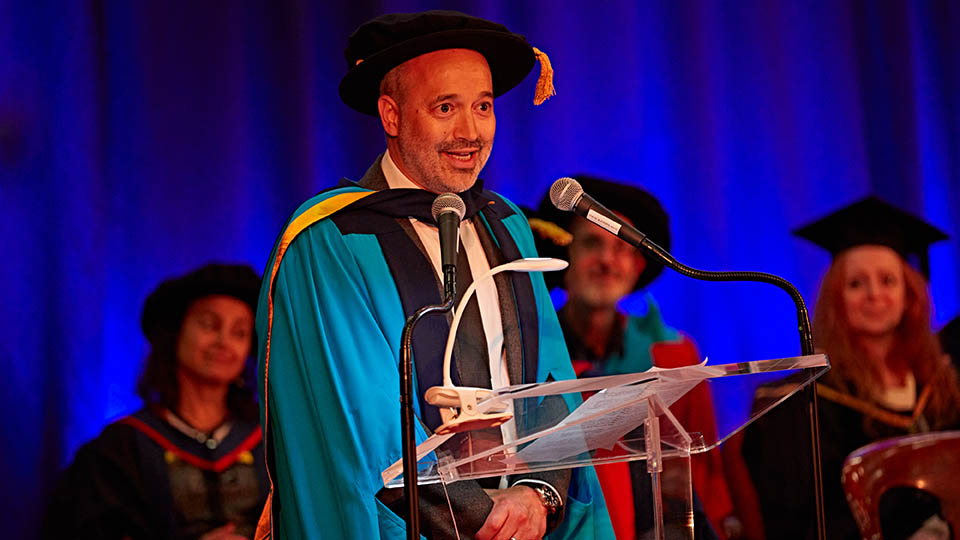 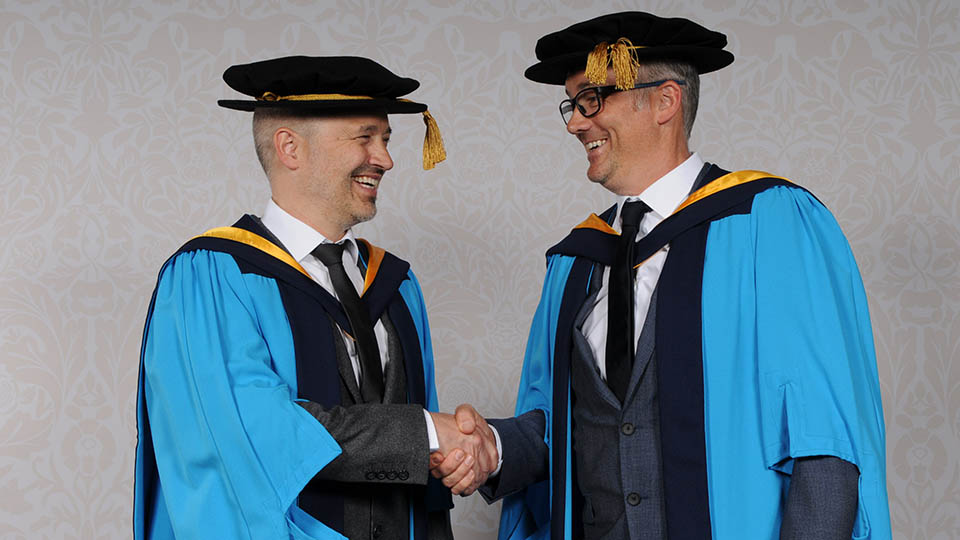 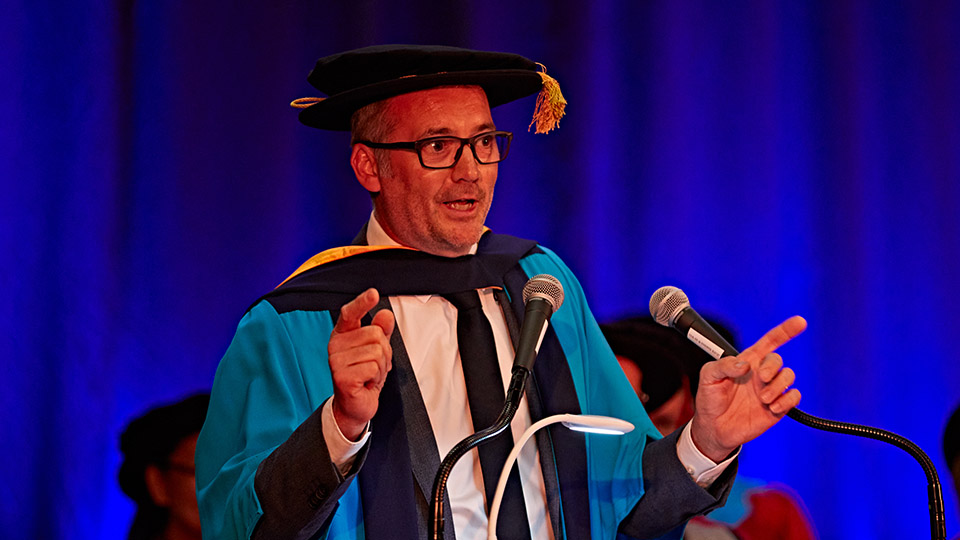 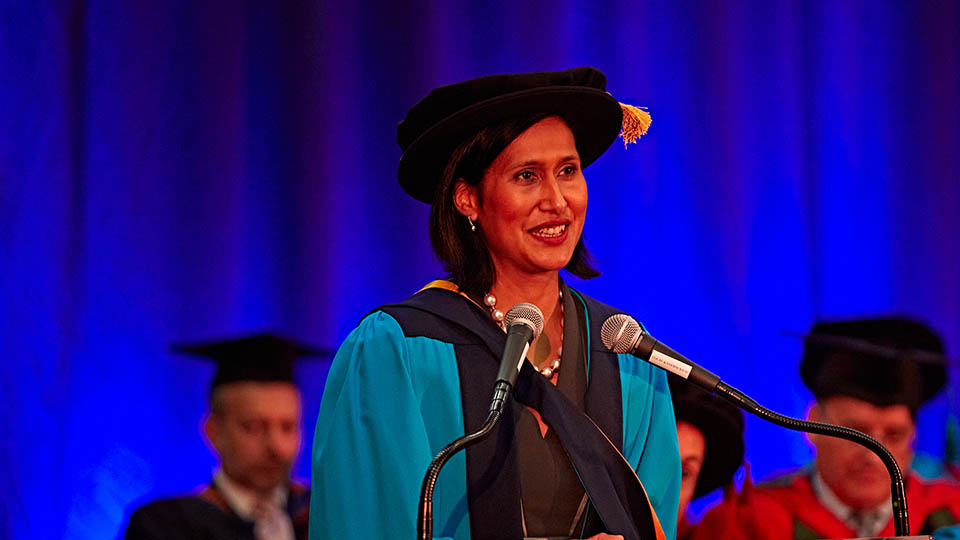 Adele, Johnny Cash and Metallica are among the many big names Andrew has worked with.

Andrew’s award-winning career in music has seen him work with some of the biggest acts in the world as a mixer and engineer. After starting out as a musician, Andrew found that his niche was behind the scenes, and after touring with Stevie Wonder and Michael Jackson he worked for several renowned producers including Don Was and Rick Rubin.

He has engineered or mixed for acts as varied as Metallica, Neil Diamond, Iggy Pop, U2, Green Day and Johnny Cash and has won Grammys for his work on albums by Adele, Red Hot Chilli Peppers and Ziggy Marley. He relocated to the UK from Los Angeles in 2015, and is a member of the University’s Music and Audio Production (MAP) research group in the School of Computing and Engineering.

“At Huddersfield I love the combination of very in-depth study of parts of the process but always letting people get through a project and understanding every aspect of it. Students really have an idea of what to expect when they come out of here. It’s a really great foundation.

“A phrase I use a lot is ‘the only thing that matters is what comes out of the speakers. You can be working on music and having a bad day but none of that matters because the listener will hit ‘Play’ and their experience is all they will get from the music. They don’t know that you ran out of food, that you had low blood sugar or whatever when you were mixing it – that doesn’t matter.

“That can be broadened out to anything in your life and career, whatever comes out of you is how you are perceived in the world. You should never compromise your art, you should do what you think is right and hopefully that translates. Always try to make great art and be a good person – and that’s it.”

Andrew Scheps reflects on his career, the approach to his work and his connections to the University of Huddersfield.

Established a leading turbocharger repair parts supplier, and was involved in an attempt on the world land speed record.

By the time he sold the business, it had a turnover of £30m and employed 250 people across Europe, the USA and China. He subsequently took over the Bloodhound Land Speed Record Project, which recorded a top speed of 628mph in South Africa in 2019. Ian is currently researching investment opportunities to support new start-up technologies in the automotive hydrogen and autonomous vehicle sectors.

“I am still a bit astounded to get an honorary degree from the university I went to when I was younger.

“I enjoyed every minute of being here, and I have found that I’ve used my degree every day when running my business. I’m an engineer but I find if you treat business like a machine, if all the components work together then the machine and the business work well.

“My advice is to keep it simple. A project is a series of small steps and each usually has a straight forward answer, but we tend to over-complicate things. Beginning to end is often complex, but one step at a time, don’t try to overthink and go with your gut feel.

“The future of transport is what interests me at the moment. We are about to change the entire way in which everything moves around the planet. The internal combustion engine is going to disappear at some point. What replaces it? It is really exciting at the moment and a real challenge for engineers coming through today.

“There is so much coming along, new technologies that need to be developed and the students of today will create the answers for tomorrow. There should be abundant opportunities - we cannot get enough engineers.”

Ian (on the left) and John Warhurst reflect on what receiving Honorary Doctorates means to their family.

Originally from Brighouse in West Yorkshire, John graduated from Huddersfield with a degree in Orchestral Composition and then continued for a Master’s degree in Electro-Acoustic Composition.

He is one of the film industry's most accomplished sound editors, having worked on blockbusters including Lord of the Rings: The Return of the King, Les Misérables and Bohemian Rhapsody, for which he won an Oscar in 2019. In early 2020 he returned to the University to give an entertaining talk about how he helped recreate Queen’s famous performance at Live Aid for Bohemian Rhapsody.

John Warhurst talks about his time as a student at the University of Huddersfield, how he ended up working in the film industry and gives advice to students who want to follow in his footsteps.

"I remember Huddersfield very fondly. It was a unique time when you had the freedom to have ideas. These were heavily challenged by my lecturers and my fellow students, and we had a lot of debates about how terrible each others ideas were.

"What you study is secondary to the process of what you are studying, of being in a time in life where you can develop your ideas and the process and be challenged on them in hopefully as positive an environment as what I found at Huddersfield.

"I still apply many of the things I studied in music composition on the films I work on today, understanding the core of something, where it comes from and linking it all together.

"To be given this honorary award on the same day as my brother is a huge honour and a great pleasure for all our family."

Hayaatun Sillem is CEO of the Royal Academy of Engineering. She has extensive leadership experience in UK and international engineering, innovation, and diversity and inclusion activities. She has been named as one of the ‘Inspiring 50 Women in Tech’ and one of the most influential women in engineering.

Dr Sillem chairs the UK government’s Innovation Expert Group and the St. Andrews Prize for the Environment, and co-chairs with Sir Lewis Hamilton his Commission on Black representation in UK motorsport. She has also served as Committee Specialist and later Specialist Adviser to the House of Commons Science and Technology Committee.

Dr Hayaatun Sillem talks about her inspirations, diversity in engineering and being a working mum.

"I came here last in 2019 and I can't believe how much has changed. As ever it's such an exciting place to be and from an engineering perspective, really, it just is such an inspiring set of activities and people that I meet every single time I come.

"We have made progress in terms of improving diversity and inclusion in engineering, but unfortunately the pace of change is still not acceptable. So we still have a profession in the UK that is made up of sixteen and a half percent women, which is still incredibly low when you look at international comparisons and other professions and there are lots of other aspects of our diversity deficit when you look at different characteristics that really troubles me.

"And it matters because engineers shape the world we live in in a really profound way. And it's incredibly important that we can be reflective of the society that we serve. What I can definitely see as a positive is that there is no serious leader in engineering now who does not consider it a personal and professional priority to improve diversity.

"It was quite funny when I took up this role, I learned quite quickly that some people are not very good at rearranging their facial expressions to hide their surprise. So I've had a lot of people very taken aback to find that I'm doing the roles that I'm doing, and sometimes it can get a bit wearing. But in the long term, I think they'll think twice about what a leader in engineering looks like.

"These are careers that will literally shape our future. And I think one of my most important learnings personally has been that it's just incredibly important to embrace whatever makes you you."