Professor Adele Jones has spoken of her pride in the achievements of the University of Huddersfield’s None in Three (Ni3) research centre in its goal to tackle gender-based violence and violence against children on a global scale.

The centre takes its name from the statistic that one in three women and girls will be subject to violence during their lifetimes, and is developing a series of educational interventions based around prosocial computer games tailored for children in the UK, the Caribbean, Africa, India and Brazil.

Having established the centre in 2016, Prof Jones recently retired but was made an Emeritus Professor by the University when she stepped down from her Ni3 role.

As Prof Jones explains, “although young people have no responsibility for the prevalence of gender-based violence, they are our biggest hope for changing this statistic. If we can empower children, raise awareness and help them to develop healthy attitudes about gender, we increase the chances of preventing violence in the future.”

After starting her career as a social worker in Manchester, Professor Jones moved into academia with roles at Manchester Metropolitan University and the University of the West Indies before becoming Huddersfield’s Professor of Applied Childhood Studies in 2007.

Changing the narrative on gender-based violence

And it is the development of the Ni3 centre, which she describes as her life’s work, which Professor Jones reflects upon with great satisfaction as she steps back from directing the centre.

“It is important that I can back off and let other people take Ni3 in new directions, and we know there are so many we could go in,” she states.

“I have put in place plans for research grants that if they come to fruition will develop the work to further countries. I have been surrounded by amazing people from all over the globe and we made it happen collectively. We should not personalise it, as it is about a collective struggle by men, women, transgender persons - it is about everyone who has worked with us to try to change the narrative. We are saying that it is not inevitable that one in three women and girls should be victims, this is not how it needs to be and that things can be different.”

Take a look at an example of a None in Three prosocial game.

Among Professor Jones’ other projects at Huddersfield was her role as Project Leader of COPING, which examined the effects that having an imprisoned parent has on children and was the springboard for the recognition by the EU and the UN of children of prisoners as an especially vulnerable group. Ni3 was established in 2016 through funding from the EU, UKRI, the University of Huddersfield and most recently in 2020 it was awarded funding from the United Nations’ prestigious Fund to End Violence Against Children.

Centre's success in focusing on prevention

“Ni3 was kind of a coming home,” Adele continues. “I was trying to understand better what it was that keeps women trapped in violent relationships and why many men think that they can behave in violent ways. I did not want to look at responding to the problem, I wanted to get underneath it. I also wanted to understand it in different cultural contexts.

“Preventing it in the first place is the thing that gets neglected, and I think that is what Ni3 has attempted to do. We have worked on prevention by working with young people, changing the hearts and minds of those most amenable to change by engaging them and using digital technology, because its reach is incredible.”

The games are developed to relate to children specifically according to research undertaken in each different country and act out scenarios where the player makes a choice that moves the game forward. But as Adele explains, they are having an impact on adults as well as children.

“To create the games, we have engaged with thousands of people – young people, teachers, parents and all kinds of stakeholders in all these countries, having conversations about gender-based violence. It is the conversation that starts to make the change. We have given children language and information to use, shown them how to get help and helped them recognise what abuse and violence is.

Discover more about the work of None in Three.

“And we have helped adults recognise the impact that violence has on children. That’s unquantifiable, and I think the games are interventions that are ahead of their time. I am confident they will be taken up because when we have trialled them, young people have been ecstatic that we have provided them with an intervention with children at its heart that does not require an adult to intervene. They can engage with a computer game on their own terms, they are in control of their own learning. Young people have loved them, regardless of whether they are in Uganda, Grenada, St Lucia or the UK”.

“The world has not caught up with digital interventions for preventing violence yet, and Covid has not helped as other areas of education have been prioritised. However, we know that there is a greater need than ever in tackling gender-based violence due to the pandemic.”

Children starting to lead the conversation

The impact of the games was brought home to Adele on a recent visit to St Lucia, where the games have been rolled out in many schools.

“One parent told me that her son had said, ‘mummy and daddy, the way you two get on is not acceptable. We are family where there is too much verbal violence, and we’re not going to deal with that anymore.’ She said they had not raised their children to speak up like that but here was a 12-year-old saying he was unhappy with how his parents related to each other. They talked about it, what they could do better, which they had never done that before.

“To meet children who have played the game who were upset with me because they wanted the next version, and wanted to know what happened to the main character and why we had not done more, was very humbling for me.”

Take a look at the work of the None in Three team's designers.

She adds, “even without the computer games, I strongly believe that our presence in schools has been transformative. The principal of one school in India said there had been an 90% reduction in self-harming among girls after our input – that is huge. Although our surveys on child victimisation are anonymous, many children used the opportunity to speak out about abuse and to get help. To date, we have carried out surveys with around 35,000 children worldwide providing a safe way for children to speak out against violence. I don’t think the value of this could ever be quantified.”

'None in Three is a team effort'

Adele was recently made Emeritus Professor by the University, and also met Prince Charles when being presented with her OBE, awarded in the 2021 New Year’s Honours, at Windsor Castle. Adele insists modestly that the accolade is recognition for the hard work of all the people involved with Ni3 around the world.

“I do believe that work such as this should be recognised. I know that it was me that wore the fancy hat and got a new frock, but it is really about recognising the work that the teams have done. I have never done a single piece of work by myself, I have always worked with others. 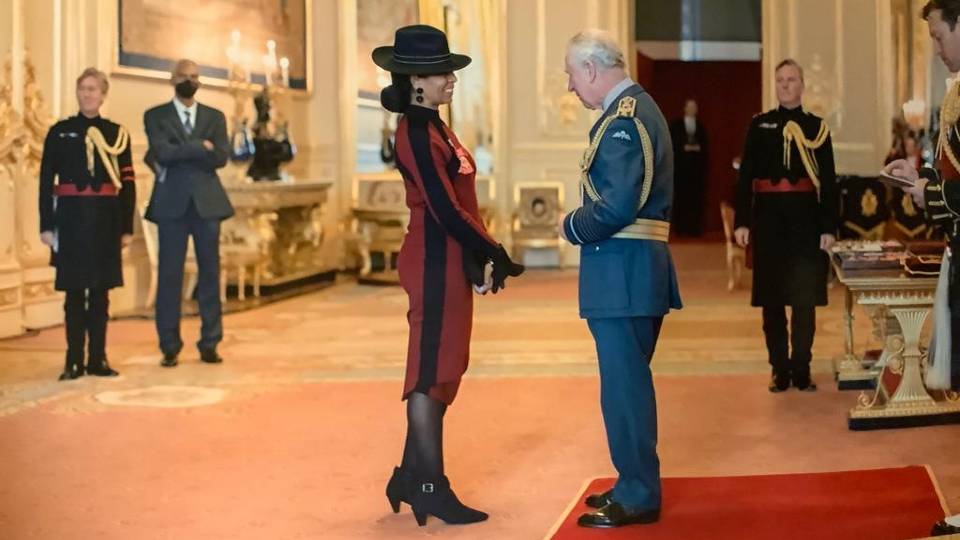 “It is an important recognition and it is important for black women, who work incredibly hard to get visibility for their efforts. Some people said ‘I hope you’re not going to accept it’, but my ancestors were enslaved, and they would not be thinking ‘don’t accept it’, they would think ‘thank goodness that things have changed to the extent that she can receive this’. The sacrifices my ancestors made along the way have been recognised.

“It was a joyous day, Windsor Castle is stunning. I cannot take away from the fact that most of its opulence is probably the result of past exploitation, and I am not making that OK but this does not diminish the castle’s beauty. Also, I met some lovely people being rewarded for some great work.

“Prince Charles was very gracious, he had just come back from the republic ceremonies in Barbados, but he had taken the time to learn about me and my work. I appreciated that, it felt genuine and it was a lovely day.”