The magic of the Brontë sisters is being opened up to a new generation by an innovative collaboration between the University of Huddersfield and Testament, the acclaimed rapper, playwright and poet.

Brontë Thoughts is a new piece from Testament that derived from a project involving the University, local schools and First Story, the creative writing charity.

Dr Michael Stewart, Course Leader and Reader in Creative Writing, showed Testament the landscape and places around Haworth, home to the Brontë family two centuries ago, that inspired the sisters to write such great novels as Wuthering Heights, Jane Eyre and The Tenant of Wildfell Hall.

“I wanted to work with Testament because I felt he might connect well with the students,” says Dr Stewart.
“He’s great to work with. He’s a very warm, intelligent guy who is open to anything.”

The area is also home to the Brontë Stones, the project led by Dr Stewart that placed four stones in key locations in and around Haworth featuring inscriptions from leading contemporary writers that were inspired by the Brontës.

Dr Stewart and First Story would, in normal circumstances, have invited students from schools in Huddersfield and Bradford to the University for creative writing workshops during 2020. While COVID-19 may have prevented that, Dr Stewart was still able to work with and inspire the students by commissioning Testament to write a new piece about the Brontës that was uploaded to YouTube. 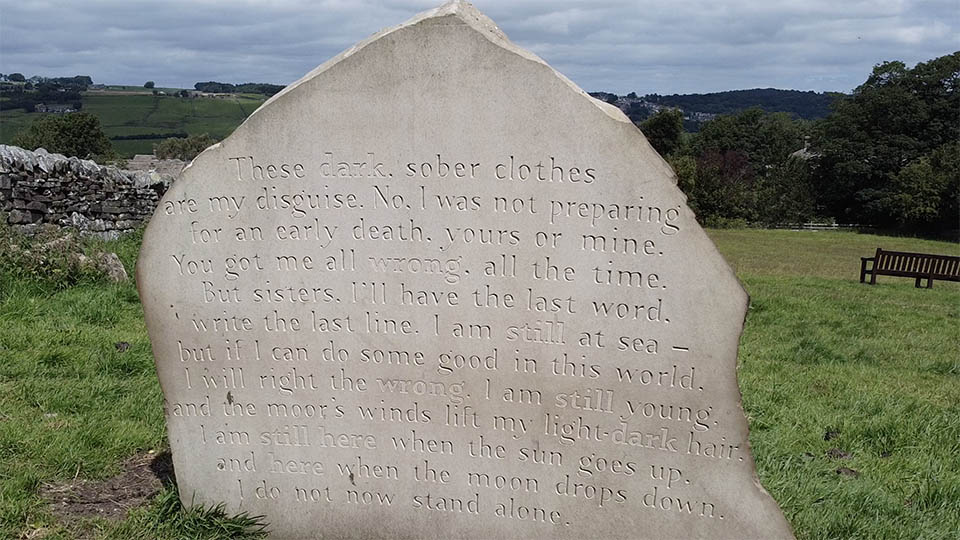 The Anne stone is in Parson’s Field, a wild flower meadow behind the Brontë Parsonage Museum. It is carved with a poem by Scottish Makar, Jackie Kay.

"By his own admission, Testament is no Brontës expert, but he allowed me to chew his ear off about them for hours while I took him on the tour around the stones. He took it all away with him and came up with this poem as a result.”

The tour of the landscape that inspired the Brontës left its mark on Testament, who says, “Michael took me to each of the Bronte stones one rainy morning and it had a profound effect on me. The landscape, weather, the interplay between nature and the man-made, the collision between the contemporary and the historical as well as Michael’s insight really gave me fresh insight on the Bronte legacy.” 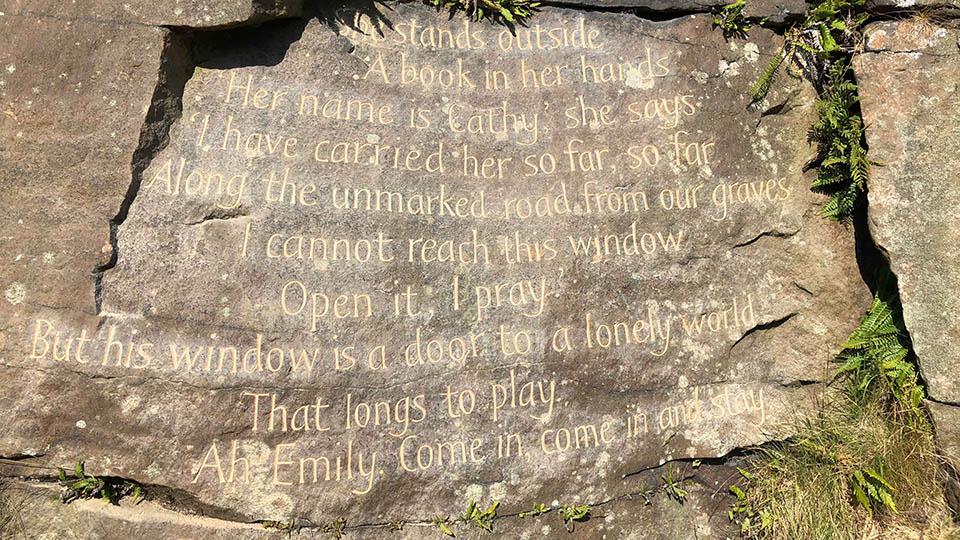 The Emily Stone is set in the rock formation Ogden Kirk, and features a poem specially written for the project by Kate Bush

The pandemic meant that plans to take students onto the moors near Haworth, with funding secured for walking gear and food, were shelved but Dr Stewart and First Story worked with a film-maker and a drone to produce a virtual tour of the area.

The Brontë Stones themselves feature new work by writers Jackie Kay, Jeanette Winterson and Carol Ann Duffy, as well as musician and singer Kate Bush, whose debut single Wuthering Heights was a UK number one in 1978.

Testament now joins this list of acclaimed artists associated with the Brontë Stones, having written the award-winning play Black Man Walking, the monologue Woke as well as being in the Guinness Book of World Records for leading the world’s largest human beatbox ensemble.

The students were also shown the inscriptions and were asked to write something that would inspire them if they came across the Brontë Stones, as Testament had done.

“We set a competition by pulling words out of the inscriptions on the stone. We told the students these words were their inspiration to write something they would like to see, that would inspire them if they discovered the stones. 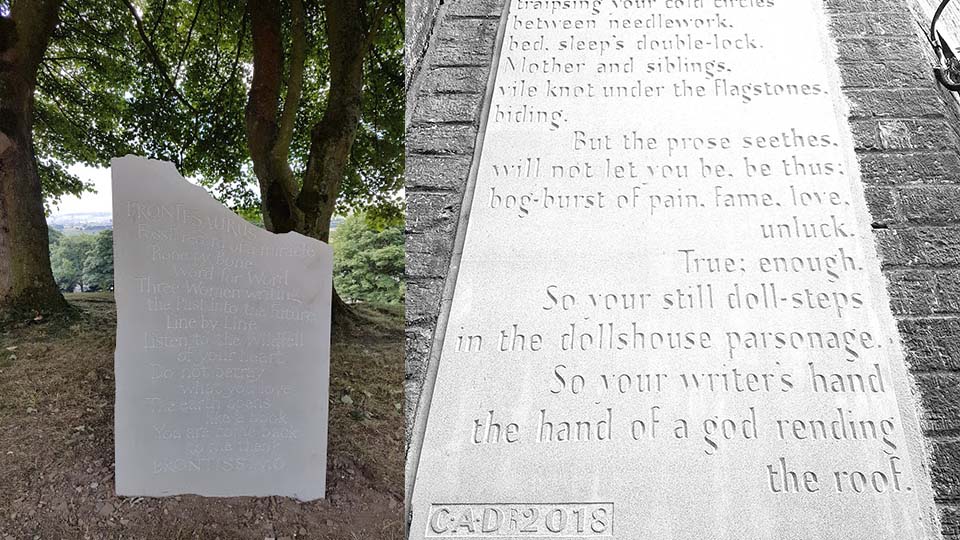 The Brontë Stone (left) is situated in Thornton Cemetery and features a poem by award-winning writer Jeanette Winterson, and the Charlotte Stone (right) is positioned in the outside wall of the Brontë Birthplace in Thornton. The poem has been written by former poet laureate, Carol Ann Duffy.

“We’d asked Testament to do the same thing, so setting them to compete with Testament was a bit of fun, but also stirred their creativity.

“Testament’s response is to the same challenge as the one we set the schools, and the students came up with some excellent pieces.”

The coronavirus pandemic means that hopes to mark the next Brontë anniversary in Haworth itself, on Charlotte’s birthday on 21 April, are on ice for now, but Dr Stewart says there are plans for Testament to perform his poem at the Brontë birthplace in Thornton to mark the placing of a blue plaque when restrictions are lifted enough to allow it.