WITH their share of a prestigious £1 million prize fund, University of Huddersfield researchers will continue their work to ensure that regions of the world most vulnerable to devastating tsunamis will receive faster warning and be much better equipped to cope with the consequences.  Climate change is a factor that increases the urgency of the issue.

It has been announced that Professor Richard Haigh and Professor Dilanthi Amaratunga – co-directors of the University’s Global Disaster Resilience Centre – are among the winners of the 2019 Newton Prize.  Their research work in Indonesia has earned them an award of £200,000 and they will continue to collaborate with Dr Harkunti Rahayu, of Bandung’s Institute of Technology.

The Huddersfield professors and their Indonesian colleague first worked together in 2014, as part of the Intergovernmental Co-ordination Group for the Indian Ocean Tsunami Warning and Mitigation System.  Dr Rahayu is Chair of Working Group 1, which is focused on tsunami risk, community awareness and preparedness.  Working together, they secured funding for multiple phases of research, including a project that examined how disaster risk reduction and climate change strategies could be integrated into policies aimed at reducing the risks facing coastal urban areas in Indonesia.

This received financial support from the Newton Fund – backed and managed by the UK Government – which builds research and innovation partnerships with 17 countries, including Indonesia.  The Newton Prize was launched in 2016 as part of the Fund, in order to demonstrate how Newton Fund partnerships are solving global challenges.

Projects in China, the Philippines and Indonesia were the focus for the latest Newton Prize – which has total annual funding of £1 million – and the work of Professors Haigh and Amaratunga with Dr Rahayu was submitted and shortlisted.

It has now been selected as the winner of the Indonesian portion of the Newton Prize, with the announcement made at a ceremony organised by the British Embassy in Jakarta.  The Huddersfield professors were in attendance, and they will be back in the UK for a Newton Prize event scheduled for 12 February in London. 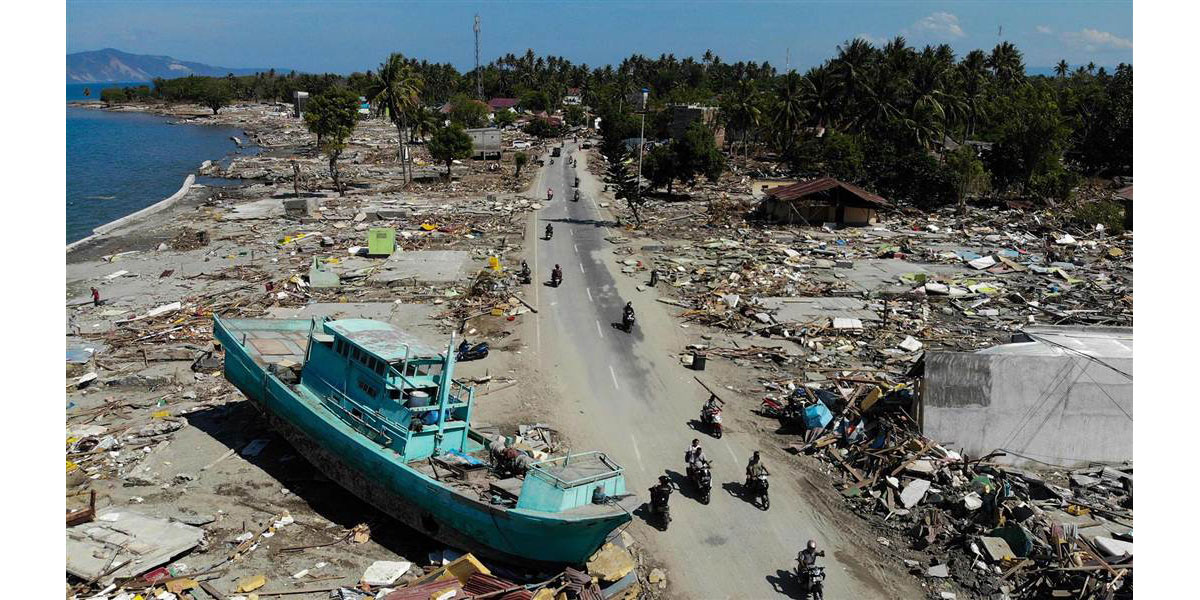 The devastation following the tsunami in Indonesia

“We are looking to improve the dissemination of tsunami early warning information, particularly at the local level,” he explained.

“We will examine the relationships and the flows between the actors involved in the process, as well as the barriers and enablers to some of the emerging technologies.  We hope to improve decision making as well as the communication of early-warning messages among key institutions, and also to communities at risk.”

Although coastal Indonesia is the focus, findings from the project will be relevant across the whole of the Indian Ocean region, added Professor Haigh, and they will be widely disseminated.

“This is very much designed as work that will make a practical difference.  It’s not theoretical but designed as applied research that will benefit the local population.”

The effects of climate change are an additional cause for concern.

“As sea levels rise due to climate change, so do the potentially devastating damages from tsunamis, storm surges and other coastal hazards.  Recent studies indicate that sea-level rise can significantly increase the tsunami hazard, which means that smaller tsunamis in the future can have the same adverse impacts as big tsunamis would today,” said Professor Haigh.

The Newton Prize project gets underway in April and post-doctoral researchers, including one attached to the University of Huddersfield’s Global Disaster Resilience Centre, will be appointed.

A Huddersfield geophysicist will join the first ever, year-round Arctic climate to bring clarity to the current data of sea ice floe dynamics