A chamber music workshop for advanced students and professional musicians

The HuCPeR 19th Century Salon offers performers chance to explore historical style, expression and ensemble performance practices in 19th century chamber music by working side-by-side with leading international performer-scholars. The event is designed to bring together musicians with an interest in 19th-century Historically-Informed Performance to make new connections, foster a community and explore challenging ideas in a supportive and open environment.

Five days of immersive coaching, workshops, presentations and discussions will be based within the University of Huddersfield’s Richard Steinitz Building, a state-of-the-art rehearsal and performance facility situated close to Huddersfield town centre. Participants will have access to pianos by Broadwood (1894) and Streicher (1870).

Participants will be placed into chamber groups to explore new approaches to 19th century music-making by playing alongside the course tutors. Alongside a daily keynote presentation by the course staff, each evening will feature a ‘salon’: a space for discussion, readings, spontaneous music-making and sharing of participants’ own research. Free time will be ringfenced for participants to explore new collaborations, read through repertoire, and have individual coaching. There will also be a workshop on routes into research at doctoral and post-doctoral level.

HuCPeR is grateful for the generous support of the Huddersfield University Research Fund to make this workshop possible.

From the University of Huddersfield

Author of Theory and Practice in Late Nineteenth-century Violin Performance

Applications are welcomed from players of piano, woodwind, strings and horn.

Although the workshop is primarily aimed at period-instrument musicians, applications from players of modern instruments with a strong interest in historical performance will also be considered. Applications from pre-formed chamber ensembles are also welcomed.

Players of historical woodwinds must be able to bring their own instrument pitched at A=438-440.

To apply, please complete this form and send, complete with a 1-page CV in bullet form, outlining your education, experience and/or professional background. Students should be of postgraduate level. An active interest in HIP research is welcomed but not essential.

The course fee is £100, including all tuition and one meal per day. A limited number of fee-waivers are available to those with no institutional support: these will be allocated in response to financial need and also to ensure an appropriate balance of instruments for the workshop.

Successful applicants will be notified by the 15 April. Late applications for any unfilled places will be considered upon receipt until 1 June. Please note that numbers of violins and upper woodwind will be limited to ensure balance.

Huddersfield is a large town situated conveniently between Manchester and Leeds in the North of England. It is surrounded by the beautiful landscape of the Yorkshire Dales, Peak District National Park and Penines, with access to many walking and cycling routes.

By train: Huddersfield is around 3 hours by train from London. https://www.thetrainline.com/stations/huddersfield

See below for recommended hotels. Further information regarding accommodation will be released shortly.

The Cambridge Hotel – http://www.thecambridgehotel.com/ (c20mins, but 5mins from train station)

Dr George Kennaway is a cellist, conductor, teacher, and musicologist. Born in Edinburgh, he studied at the universities of Newcastle and Oxford, the Guildhall School of Music, the Salzburg Mozarteum, and the University of Leeds. He was a member of the Scottish Chamber Orchestra and the Orchestra of Opera North for 30 years, and now regularly appears as a soloist and chamber music player, on modern, 19th-century, and baroque cello. He was a member of the CHASE research project in 19th-century music editions at the University of Leeds, Director of Music at the University of Hull, and is currently Visiting Research Fellow at the Universities of Huddersfield and Leeds. He is a member of the Meiningen Ensemble, a chamber group which explores practical applications of historical research to the 19th-century repertoire. He has published a monograph on 19th-century cello performance practice, and articles and book chapters on textual and theoretical aspects of 19th-century performance research. He is also the leading British specialist in the art and music of the Lithuanian M.K. Čiurlionis (1875-1911), and has frequently lectured on Čiurlionis and aspects of Baltic music both in the UK and in Lithuania. He has taught at the Royal Northern College of Music and the Lithuanian National Academy of Music.

Claire is a professional period instrument violinist and has been a member of the Orchestra of the Age of Enlightenment (OAE) since 2000. With OAE, Claire has performed and recorded a vast range of Baroque, Classical and Romantic repertoire, varying from self-directed chamber programmes to early twentieth-century symphonic repertoire and commissions by contemporary composers. In addition, Claire has played with many other period instrument ensembles including The Sixteen, Florilegium, Steinitz Bach Players and Collegium Musicum 90.

Claire was awarded an AHRC Fellowship in the Creative and Performing Arts in 2010, and she spent 4 years at Cardiff University researching early nineteenth-century violin playing and lecturing on historical performance before coming to the University of Oxford Music Faculty as a Research Fellow in 2014. In April 2016 Claire became Principal Investigator on the 5 year, AHRC funded Transforming C19 HIP project, leading a team of four researchers. Claire is also a Postdoctoral Research Fellow at Christ Church, Oxford.

Claire teaches Historical Performance classes at the Royal Academy of Music, London and has given lectures, workshops and masterclasses and coaching projects in many UK universities and conservatoires, as well as at the Koninklijk Conservatorium, Den Haag, Universität der Künste Berlin, Université de Poitiers, L’Université Paris-Sorbonne, Jeune Orchestre de l’Abbaye (Abbaye aux Dames, Saintes). She has presented a number of pre-concert talks at the Royal Festival Hall, Queen Elizabeth Hall London and on the radio for the BBC Proms. Claire is often asked to provide advice and coaching to soloists, orchestral leaders, and professional ensembles on early nineteenth-century string playing.

Emily Worthington specialises in playing period clarinets from the 18th to early-20th century. She has played with orchestras across the UK and Europe, including the Orchestra of the Age of Enlightenment, Academy of Ancient Music, The Gabrieli Players, Spira Mirabilis, Le Cercle de l’Harmonie and La Chambre Philharmonieque. As a chamber musician, Emily was selected for young artists’ residencies at the Festivals of Saintes and Utrecht and broadcast on Netherlands Radio 4. Emily now co-directs Boxwood and Brass, a historical ‘Harmonie’ or wind ensemble specialising in the music of the late-18th and early-19th centuries. Boxwood & Brass released its debut CD in 2016 to universal critical praise. Emily’s research, which concentrates on 19th and 20th-century performance practice and early recordings, has been supported by an AHRC Doctoral Award and an Edison Research Fellowship. Emily is a Lecturer in Music Performance at the University of Huddersfield and has acted as a guest tutor and lecturer at various UK conservatoires as well as Chetham’s School of Music and the Abbaye aux Dames de Saintes.

Dr Inja Stanović is Croatian pianist and researcher, born in Zagreb and currently residing in Sheffield, UK. As a pianist, Inja has performed throughout the world, including concerts in Croatia, Australia, France, Germany, Italy, Slovenia, Mexico, the United Kingdom, and the United States. Inja’s education started in Croatia at the Ino Mirković School of Music, licensed under the P. I. Tchaikovsky Moscow State Conservatory, where she studied under Marina Ambokadze. She completed two postgraduate degrees at the Schola Cantorum, Paris, with Eugene Indjic. Shortly after, Inja moved to the USA to complete a Masters degree at the Boston Conservatory with Michael Lewin. Recently, Inja finished her PhD at the University of Sheffield, focusing on nineteenth-century performance practice relating to the work of Frédéric Chopin. Besides being an active pianist, Inja has published articles in HARTS and Mind Journal and Swedish Musicological Journal, and is currently preparing a book chapter for Cambridge Scholars Publishing “Music and Sound Art: Composition, Performance, Philosophy”. Inja has held various academic posts, including research fellowship at the Sydney Conservatoire and visiting lectureship at the Birmingham Conservatoire. Most recently, she has won the prestigious Leverhulme Trust Early Career Fellowship, hosted by the University of Huddersfield. Inja is conducting a three year research project under the title “(Re)constructing Early Recordings: a guide for historically informed performance”. 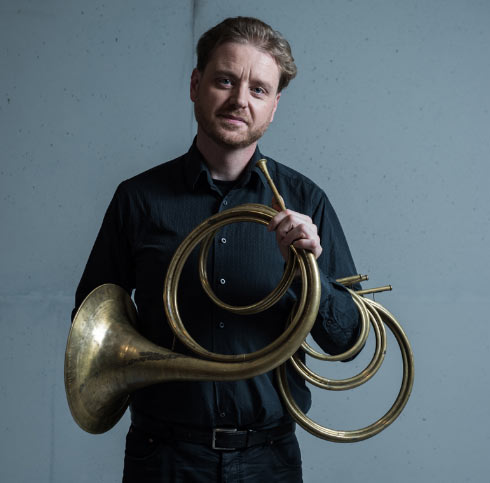 After his post-graduate study "200 years of Belgian Horn school" (Orpheus Institute 2008) he has continued researching the practice of horn playing in Belgium, resulting in a large number of published articles, music productions and recordings.

Jeroen is a full-time research associate and teacher of natural horn at the School of Arts-University College Ghent, a faculty member of the Royal Conservatory of the AP-institute in Antwerp and currently is preparing a Doctorate in Arts on the legacy of the romantic Ghentian horn tradition at Ghent University.